At the end of my first day on a recent trip to Budapest I got nabbed for fare evasion on the subway! 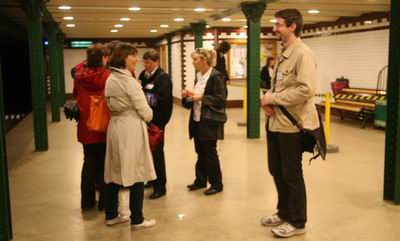 It rained all day and towards the end of the day, as the rain got heavier, we (there were four of us) decided to head back to the hotel. Of course we could not find a taxi so we decided to try the subway – the oldest subway in Continental Europe and the second oldest (after the London Tube) in all of Europe.

But we could not find a ticket machine and the ticket desk was closed. So we jumped on the train, rode to the next station, got off, found a ticket machine and the damn thing would not take our money. We tried my notes, then in turn we all tried to feed different money into the machine, it simply would not accept them. So we got back on the train to ride to the next station to try again.

And promptly get caught for fare evasion! We were fined 6000 Ft a head, US$30 each. This was doubly annoying:

1. If we’d just carried on, not stopped and tried to do the right thing, we’d probably have got away with it.
2. They must have seen us wrestling unsuccessfully with the machine and instead of coming over and saying ‘can we help’ they waited until we got on the train and grabbed us!