From Dubai to Oman … then back to Dubai, then to Oman


‘No this is not Omani immigration,’ the young man at the roadside office announced, ‘that’s a few km further down the road. But has your passport been stamped for leaving the UAE?’

‘That’s at the Hatta Fort Hotel,’ he explained, ‘you will have to go back to Hatta.’ 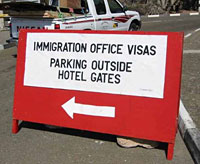 So we U-turned, drove back past the United Arab Emirates immigration arrivals office – which took a little explaining: no we weren’t arriving in the UAE, we were trying to leave – and a few km back in Hatta found the hotel and made our departure official.

It was to be expected. Our Arabian Peninsula guidebook was (deliberately?) vague on the situation: you needed a visa, they cost about US$20, they were ‘theoretically’ available at the border, therefore it was ‘better to obtain a visa in advance’ if you were travelling by road. The Thorn Tree had confirmed that they definitely were available at the border. At least at the Al Ian-Buraimi crossing. At Hatta, who knows? But the nearest Omani Embassy to Australia was in Tokyo so we decided to take our chances.

A huge, glossy, domed, marble-surfaced and, it turned out, near-empty immigration office shimmered into view and within minutes our arrival was stamped in our passports. No forms, no photos, no money, no fuss although the immigration official did conclude with a simple command: ‘now go to Oman.’

Travelling companion Tad, with his Washington DC-issued visa did have a slight problem: ‘Where is your car insurance?’ the official enquired. But our car insurance was good enough for all of us. 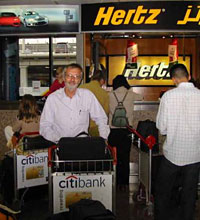 We would have arrived in Oman an hour earlier if it hadn’t been for that damned insurance. The Hertz office at Dubai airport had no idea we were taking the car into Oman and hadn’t arranged the additional coverage, even though my booking confirmation noted the extra cost. We stood by the counter for over an hour while somebody at the insurance office was roused to issue the policy.

Then it was plain sailing, we managed a U-turn in the morning rush hour traffic after we set off in the wrong direction from the airport and set the cruise control for just below our Honda 4WD’s 120 km/h speed warning bell tone. An hour later we pointed out the first camels by the roadside and stopped to wander the heritage village in the border town of Hatta before tackling the border question. 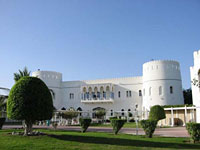 At the coast there was a mystifying traffic stoppage which turned out to be because Sultan Qaboos bin Said was flying over in a helicopter. Then we were in Sohar on Sultan Qaboos Road down to the beach. That fantasy fort-like building, could it be the sultan’s beachside residence? No it was just the Sohar Beach Hotel, where we were staying the night.