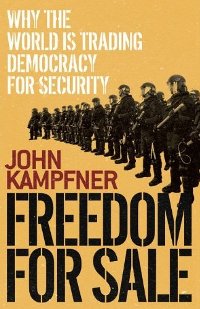 At the Jaipur Literary Festival in India last month I heard John Kampfner speak about his book Freedom for Sale, subtitled ‘how we made money and lost our liberty.’ The book takes eight countries – Singapore, China, Russia, the UAE, India, Italy, Britain and the USA – and examines how people in each country, in their own distinct fashion, have traded liberty for security and/or money.

Singapore – ‘Disneyland with the death sentence’ as William Gibson once neatly put it – is a prime example. Everybody’s happy and puts up with the government’s paternalistic control because (almost) everybody comes out of it OK, as long as they agree to let the government pull the strings.

It’s just as bad in other places – Dubai where you turn a blind eye to virtual slave labour because you get to live comfortably, Russia where if you cross the government or the wrong oligarch you’re dead, China where you end up in prison if you speak out or even America where post 9-11 (and  shades of the McCarthy era) you can easily end up labelled a fellow traveller, a supporter of terrorism. Not a happy book although it’s more current events than a measured look back at the era.