France to Victoria, Cyprus to Melbourne 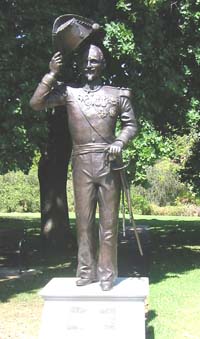 I spent Australia Day – 26 January – at the small Victorian gold rush town of St Arnaud. So how did this town, 250km (150 miles) from Melbourne, end up with a French name? Well it was originally named New Bendigo, after the larger gold rush town of Bendigo I guess. Then for some curious reason it was renamed after Marshal Jacques le Roy de Saint Arnaud, general in command of the French forces in the Crimean War which was on at the time. There’s a statue of the French war hero in the Queen Mary Botanic Gardens in the centre of town. 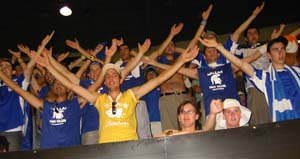 and Cyprus comes to the Australian Open
One of the pleasures of international sporting events is you don’t have to go overseas to travel, overseas comes to you. On Sunday 22 January I was at the Australian Open tennis grand slam in the Rod Laver Arena in Melbourne to see the number 2 seed Andy Roddick beaten by an unseeded Cypriot. Can you name any sporting heroes from Cyprus? I couldn’t until Marcos Bhagdatis came out the winner. But equally amazing was his support team, suddenly Cyprus flags and maps of Cyprus were popping up all around the court and in one corner a noisy (but good humoured) crowd in blue and white cheered him to victory every point along the way.

And my camera comes back to me
Somehow after I took the photo of the Bhagdatis supporters I managed to drop my camera instead of putting it back in my day pack. Next day it was returned to me by the Melbourne Olympic Park lost & found department – thank you!