Flying under the Bridge


Last week I had dinner at Melbourne University with assorted people involved in the media, journalism and publishing in Australia and the guest of honour Lord Justice Leveson. Sir Brian Leveon was in Australia to deliver lectures on his recently completed report into the News of the World phone hacking scandal in the UK. Unfortunately – for those people, like me – who went to his lecture it was not a very enlightening affair. The online news journal Crikey ran a story on 13 December headlined ‘The unbearable dullness of being Lord Justice Leveson.’ Well he admitted there was going to be nothing new before he launched into his lecture, he wouldn’t comment or add anything to the report – he saw it as a judgement and judges don’t discuss their judgements.

But the dinner guests also included a 92 year old gentleman – Peter Isaacson – who retired after a long and distinguished career in local, community and business publishing in Melbourne. At the end of the dinner I commented to Mr Isaacson that I seemed to remember an interesting photo from his younger days as an RAAF pilot. ‘That might be right,’ he replied. 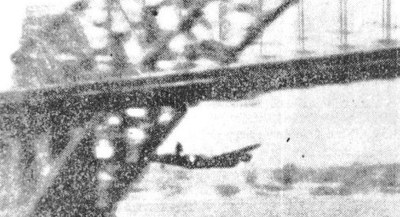 ▲ Back home I soon found this grainy photograph of a four engine WW II Lancaster bomber flying underneath Sydney Harbour Bridge in 1943, captained by a 23-year-old Flight Lieutenant Peter Isaacson!