Our trip is taking 25 days and makes 22 stops along the way. It’s organised by the small Australian operator Heron Airlines. My first posting on the trip was an introduction to the history of London to Australia by air. Flying to Australia 2 covered the trip from London to Jersey, Cannes, Malta and Crete. Flying to Australia 3 continued through Egypt (with an unexpected diversion to Athens) and on to Muscat in Oman via Saudi Arabia.

We made five stops as we crossed India, our stepping stone from the Middle East to South-East Asia. We departed Muscat in Oman in the morning, but Agra, our stop for the night was not only beyond our range it’s not a regular international arrival point. So our first stop was Ahmedabad in the western state of Gujarat. En route we flew close by Karachi, where I spent the first five years of my life. I could pick out Clifton Beach where I used to visit as a small child. 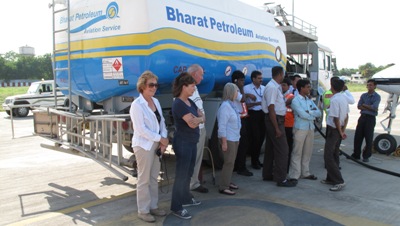 ▲ Ahmedabad was a refuelling stop and we stood in the shade of the fuel truck while the operation was completed.

India is still India, there was a lot of paperwork and bureaucracy to be completed and as a result it was a race to get to Agra before the airport closes for the night at 630pm. Even that was a one hour extension from the usual 530pm closing time. We made it with 10 minutes to spare. 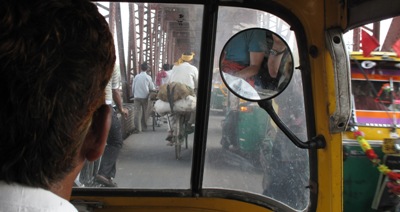 ▲ In Agra Maureen and I got an autorickshaw to take us to a number of sites on the east bank of the river.

Tourist Agra – the Taj and the Red Fort – is on the west bank of the Yamuna River, but there are a number of interesting and much less crowded attractions on the east bank. Although I’ve been to Agra several times I’d never admired the ‘across the river’ view of the Taj from the Mehtab Bagh gardens. If Shah Jahan’s (probably mythical) mirror image ‘black Taj’ had ever been built this is where it would have stood.

▲ The Taj from Mehtab Bagh

We also visited the Persian style Chini-ka-Rauza, the much-decayed tomb of Afzal Khan, the poet who was Shah Jahn’s chief minister. Plus the Itimad-ud-Daulah – the tomb of Mizra Chiyas Beg, father of Jehangir’s wife Nur Jahan and grandfather of Mumtaz Mahal, Shah Jahan’s wife and the ‘lady of the Taj.’ He was also Jehangir’s chief minister or wazir. Nur Jahan built the tomb for her father and it’s a clear precursor of the Taj Mahal, although much smaller, hence the ‘baby Taj’ nickname. Its intricate design and compact size gives it a jewel-like feel and unlike the crowded ‘big Taj’ you can sometimes almost have the baby version to yourself. 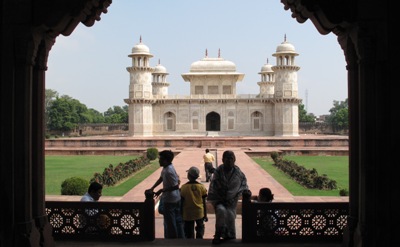 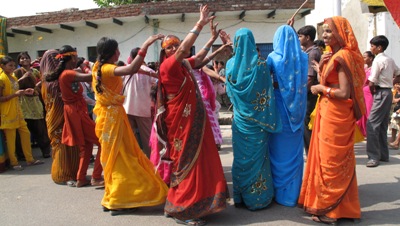 ▲ There was a festival on and everywhere we went in Agra that day there was dancing in the streets.

Our next stop was Khajuraho, still far enough off the beaten track to be relatively uncrowded with tourists, despite those Triple-X rated temples. The area around the hotel where Maureen and I stayed in 1980, when we were researching the very first edition of the India guide, looked no different at all. The temples, however, are now in a well kept park. 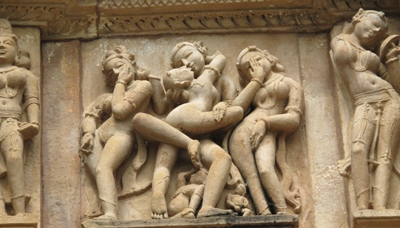 ▲ A typical Khajuraho temple sculpture, two bystanders look aside in shock at the activities of the couple in the centre. 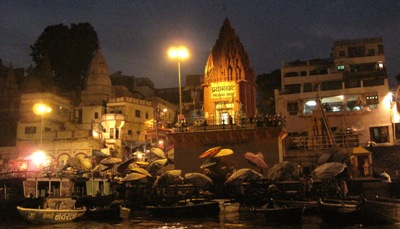 ▲ Prayag Ghat on the Ganges in Varanasi at night 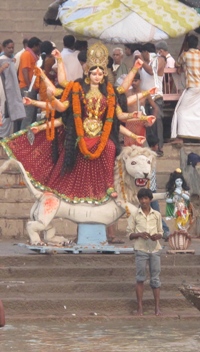 ◄  A Durga Puja figure about to be pushed into the river

Our visit to Varanasi coincided with the end of the Durga Puja festival. Huge images of the Hindu goddess are made of straw and clay, then brightly painted. The images are carried down to the river and pushed in to float away and dissolve. Durga Puja is principally a festival for Kolkata (Calcutta) and West Bengal. 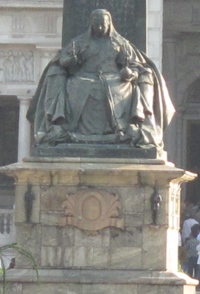 Calcutta was our final stop in India and of course we had a look at the most imposing relic of the Raj, the Victoria Memorial building. It’s fronted by a hulking statue of Queen Victoria looking heroically unamused. My favourite reminder of the colonial era is on Sudder St and I managed to fit in a brief visit there as well. A stay at Fairlawns Hotel is like jumping back to India before the British left. I’ve been a Fairlawns regular on previous visits to the city and even if you don’t stay it’s a good place to drop in for a cold beer in the courtyard. 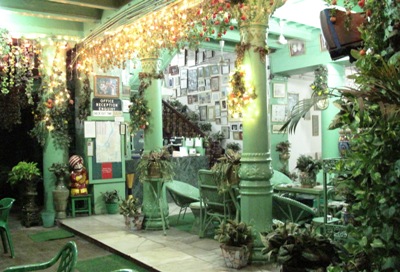