Day 6 and the next stage of my London to Australia flight should have been from the Greek island of Crete to Alexandria in Egypt. Except when we got to the airport we couldn’t take off. Either we weren’t allowed to depart Greece or we weren’t allowed to arrive in Egypt. Who knows, but whatever the problem might be our plane wasn’t going anywhere.

So we abandoned it and took a commercial flight to Athens and, after a long afternoon pause, another flight to Cairo. Our plane caught up with us two days later. 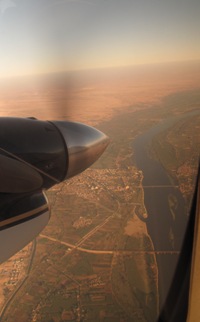 ◄ Crossing the Nile as we descend in to Luxor

Meanwhile Maureen and I backtracked to Alexandria to see the Alexandria Library, a modern reincarnation of the magnificent library of ancient times. I was surprised how relatively empty the shelves were, how relatively uncrowded the desk space was and how the library users were overwhelm- ingly (perhaps 80%?) female.

The drive along the new Desert Highway freeway between Cairo and Alexandria was a reminder that the roads of Egypt are still up there with Iran and Saudi Arabia as the most terrifying in the world.

Inside the library features columns reminiscent of the papyrus bud columns of Pharaonic Egypt. ▼

Back in Cairo we visited the Egyptian Museum, which is just as crowded and confusing as it was on my last visit, over 20 years ago. A wonderful collection, but badly displayed, disorganised and poorly labelled, altogether a chaotic shambles. OK, they couldn’t afford major improvements, but couldn’t you get a horde of summer students to redo the labels and descriptions over the decades? Never mind the new Grand Egyptian Museum is on its way, if already somewhat behind schedule and over budget. 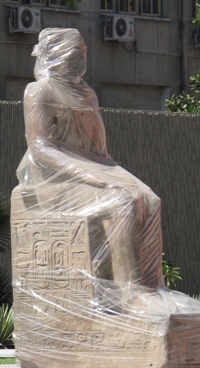 ◄ A statue wrapped up and ready to go, heading to the new Grand Egyptian Museum?

.
The next stop was Luxor, an interesting flight south with the Nile off to the west and the Red Sea remarkably close to the east. In between? Empty desert. There’s been a lot of development and way more security since we last visited Luxor, for example you can no longer walk up over the hills from the Valley of the Kings to the Valley of the Nobles. In the entrance building to the Valley of the Kings there’s a superb clear plastic model of the valley which, if you look underneath, features tiny replicas of the labyrinthine passages and tunnels leading to the Pharaoh’s tombs. Fascinating!

Reliefs at the great temple of Karnak in Luxor ▼ 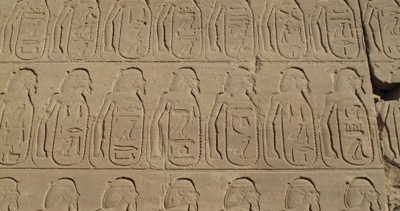 Across the Nile we visited the Valley of the Kings and the huge temple of Queen Hatshepsut, the only female pharaoh. 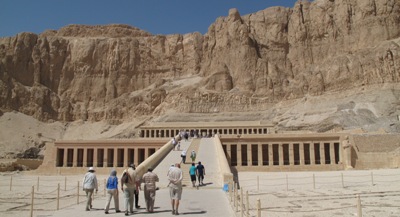 From Luxor we flew across the desert to the Red Sea, a sprinkle of resorts dotting the coastline below us. Then it was across the Red Sea and over Saudi Arabia to Riyadh for a refuelling stop.

▲ Centrepoint irrigation circles like these are a reminder that if you pour enough money – in the form of water – on to a desert you can grow most things. At huge cost. The Saudis are beginning to wonder if it’s worthwhile.

From Riyadh we continued east across Bahrain and then flew south past Qatar and arrived overhead Abu Dhabi just as night fell. From Muscat in Oman we made a trip to the busy market at Nizwa. 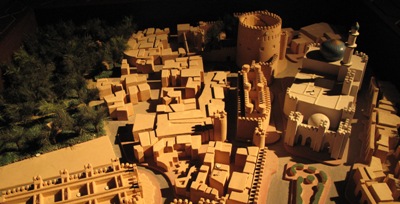 ▲ The museum in Nizwa’s imposing old fort features this fine model of the fort and the adjacent market or souq.