Flying over the Kimberley – Again


Last September Maureen and I went out the Kimberley Coastal Camp on Port Warrender in the Kimberley region of Western Australia. We flew out there in a single-engined Cessna 210, a couple of hours flight from the town of Broome with a non-stop gallery of amazing views appearing below us. We liked the Kimberley Coastal Camp so much that when we returned to Darwin in the Northern Territory last week for a friend’s daughter’s wedding we took a bunch of our friends for a return trip.

Approaching the Kimberley from the east rather that the west was equally spectacular. This time we were in a larger (although still single-engined) Cessna Caravan and the 650km flight again took about 2-1/2 hours. As we took off from Darwin we could see the US Navy’s amphibious assault ship the USS Peliliu (a small aircraft carrier to you and me) and the USS Pearl Harbor in dock below. Darwin has a Pearl Harbor connection, just 10 weeks after Mitsuo Fuchida led the Pearl Harbor attack he led the same Japanese aircraft from the same aircraft carriers on 19 February 1942 to attack Darwin. More bombs were dropped by more aircraft and sank more ships that day in Darwin than at Pearl Harbor just 10 weeks earlier. Pearl Harbor was only attacked once, 58 more attacks on Darwin were to follow. 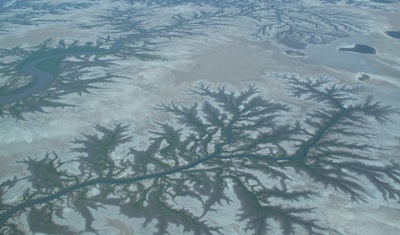 We flew over the Northern Territory for about an hour then crossed Joseph Bonaparte Gulf, keeping close to  the northern edge of the Parry Lagoons Nature Reserve, a huge flatlands with wonderful braided river patterns. It’s a Ramsar Wetland which is home to over 200 bird species which makes it very popular with bird watchers. 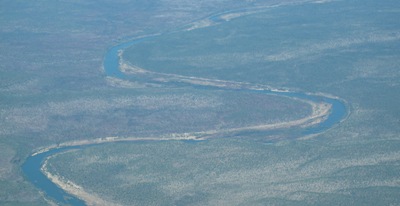 Then our flight took us across the eastern side of the Kimberley, a series of rivers, many of them – like the Drysdale River – still carrying water just a couple of months into the dry season. 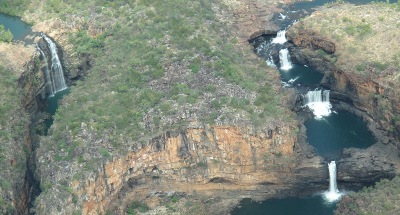 Finally we took a couple of turns over the magnificent Mitchell Falls, probably Australia’s most spectacular waterfall, before we landed at the Mitchell Falls Plateau Airstrip. Next blog I’ll report from the Kimberley Coastal Camp.