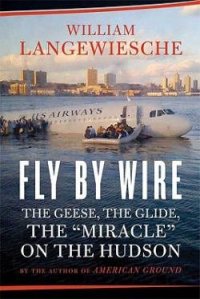 I thought I’d read quite enough about the January 2009 US Airways flight which ended up  in the Hudson River in New York, but I was given a copy of this book and couldn’t put it down. William Langewiesche has written widely on aviation topics (amongst other things). His Congo from the Cockpit (Vanity Fair, July 2007) is a classic.

This slim volume covers the five minutes from takeoff to touchdown – including the ingestion of a number of Canada geese (click here for my other bird book this month) – but makes lots of other sidetrips. There are accounts of assorted other flights which ended up in the water and assorted other long glides including the classic British Airways glide over Java in a 747 back in 1982. The engines stopped after the aircraft inadvertently flew through the dust from a volcanic eruption, the crew restarted some of the engines and landed safely in Jakarta following one of the less reassuring flight announcements: ‘This is your captain speaking. We have a small problem. All four engines have stopped. We are doing our damnedest to get them going again. I trust you are not in too much distress.’

Plus there’s a lot about the Airbus A320’s ‘fly by wire’ control system which, according to Langewiesche, is due some credit for the successful ditching. Along with a couple of skilled pilots.