Nobody has died – yet – but the hijack of Ryanair flight 4978 was certainly a shocker. Belarus is ‘Europe’s last dictatorship’ and Alexander Lukashenko, the brutal leader, looks precisely like what he is: a Soviet era thug. The best you can say is that he didn’t shoot the aircraft down, we can leave that sort of activity to his prime supporter Vladimir Putin who shot down Malaysia Airlines Flight 17 in 2014.

▲ The airport Roman Protasevich did not want to see

I visited Belarus in 2018 and very much enjoyed Minsk – home in the USSR for Lee Harvey Oswald before he moved back to the USA to shoot JFK in 1963. Sadly Belarus is not the only country where you can say ‘nice place, shame about the government.’ Check this story in The Conversation about what international law says about the Protasevich kidnapping.

Hijacks, especially government sanctioned ones, even if it is by an outlaw government, are rare, flight diversions are much more common. Plenty of them are for political reasons:

• We don’t like you flying over our country – so assorted Arab countries don’t let El Al, the Israel airline, fly over their airspace. Or when assorted Arab countries decided they didn’t like Qatar, the airline of Qatar, they closed their airspace. For a long time Vietnam’s airspace was closed to international flights, so Bangkok-Hong Kong flights had to make a lengthy detour around the country.
• You would think the USA would be very unenthusiastic about flights to Cuba crossing US territory. Canada has always provided lots of tourist visitors to Cuba and a glance at the map will confirm that getting to Cuba without crossing the ‘lower 48’ would be very difficult. Perhaps fortunately for Cuba getting from the US east coast to assorted destinations in Central America or South America without crossing Cuba would be a serious nuisance. My last Cuba crossing from the USA was a flight from Miami in Florida to Bogota in Colombia, right across the middle of Cuba. So Havana-bound flights from Canada can cross the USA, just like flights out of Miami heading south can cross Cuba.

Or there are safety reasons not to cross a country:

Lots of places you might think are not so safe are in fact quite open to overflights. Lots of flights between South or Southeast Asia and Europe routinely fly over Afghanistan for example.

The USA has, on occasion, had their own fun with overflights, check my 2010 report about passengers the USA didn’t want on aircraft crossing the USA. In 2009 they forced an aircraft to divert because they didn’t approve of a journalist on board, but hadn’t expressed their displeasure before the flight departed Paris for Mexico City. Much closer to the Belarus story was former rock star Cat Stevens flying London to Washington DC with United Airlines in 2004, en route the US authorities decided they didn’t like him and diverted the aircraft to Bangor, Maine, took him off the flight and sent him back to England. There were no comments about which songs they didn’t like. 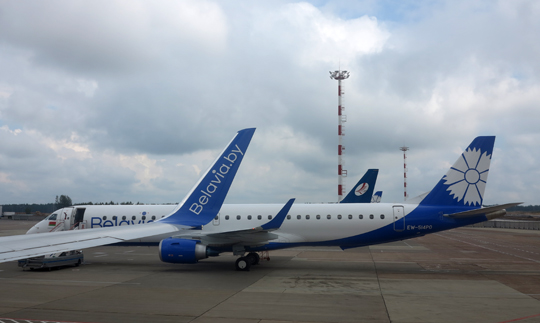 ▲ An unwelcome airline, Belavia, the airline of Belarus

Right now Belavia is an unwelcome airline in assorted countries and Belarus airspace has become a no go zone. Of course Lukashenko’s buddy Putin has retaliated by refusing to let some flights land in Moscow if they avoided Belarus en route. A British Airways 777 flying from London to Islamabad in Pakistan which had avoided Belarus airspace was then put into a holding pattern over Russian airspace when the Russians became unhappy. Eventually it used up so much fuel it had to land in Moscow to refuel before continuing to Pakistan. Russian enthusiasm for making life difficult for airlines has to be tempered by the troubled Russian economy needing the cash from overflight rights.