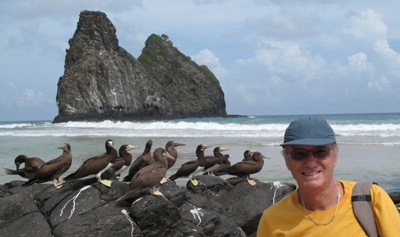 Sitting at a beach café, sipping a caipirinha, watching the sun set and trying not to be distracted by the girls on the beach in their fio dental, dental floss bikinis. Well someone’s got to do it. My visit to Fernando de Noronha was a total surprise, I thought I was going to be in Sao Paulo on night one of my Brazil visit, working with the publisher of the Brazil Portuguese-language edition of the Lonely Planet Magazine. Instead they whisked me straight off to this island in the Atlantic. 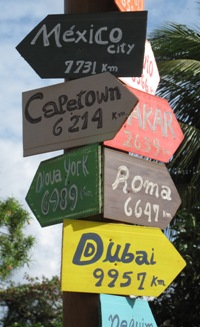 The second surprise is where the island is. Closer to Dakar on the west coast of Africa than to Sao Paulo, where I started the day. And check the sign, Mexico City is further away than New York and Rome is closer than either. When Air France flight 447 crashed into the Atlantic in June 2009 this was the closest land.

◄ Distances from Fernando do Noronha 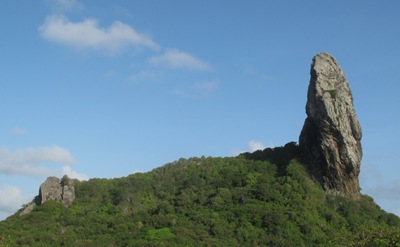 Fernando de Noronha is noted for its beautiful postcard-perfect golden sand beaches and its extraordinary rock formations. Like the Morro do Pico, as seen from the deck of my hotel room. The Brazil beach rating authority categorises four beaches in Brazil as ‘5 star.’ Three of them are on this island.

Fernando de Noronha’s early history dates back to the Portuguese colonial era, it’s named after a Portuguese aristrocrat who never set foot on the island. There are an assortment of old fort sites around the island, but only one fort – the Forte dos Remédios – still stands. Down below the fort in the main settlement of Vila dos Remédios is the Igreja Nossa Senhora dos Remédios church with its eye catching orange-painted trim.

Snorkelling and scuba diving are popular activities around the island and Brazil and its beach culture means the snorkelers are often as good to look at as the underwater activity. I was looking down from the cliff tops above the beautiful Baía dos Porcos – the Bay of Pigs.

There’s as much activity in the air as under the water. As in the Galapagos there are varieties of boobies and noddies, this red-footed booby and chick was perched in a tree above the Baía dos Porcos. 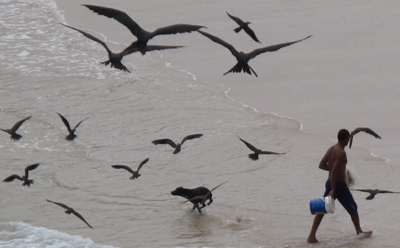 Meanwhile down at sea level these frigate birds were hoping to get a free handout from some fishermen hauling in a net of sardines. The dog was going crazy. 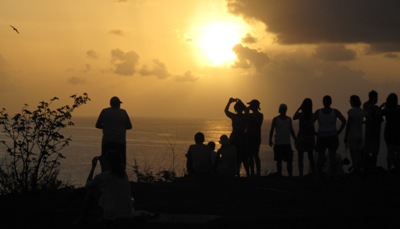 ▲ Sunset from Forte do Boldró

Like any good tropical island with a coast facing west catching the sunset is part of the experience, preferably while sipping a caipirinha (the ‘unofficial Brazilian national drink’) or a cold cerveja. This was the approaching sunset view from another fort site, the Forte do Boldró.