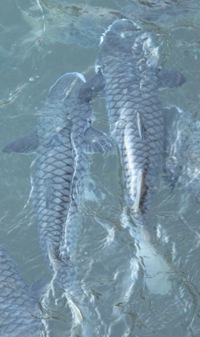 Feeding wildlife is widely regarded as ‘not advisable,’ despite which plenty of it gets fed in Australia’s Northern Territory. Aquascene is one of Darwin’s big attractions, particularly for children. Every day at high tide the local fish have learnt to swim in to Doctor’s Gully, a stone’s throw from the centre of Darwin, for a free meal. You can stand on the water’s edge or wade in a few steps and fish like these mullet will eat out of your hand. The batfish are more spectacular. 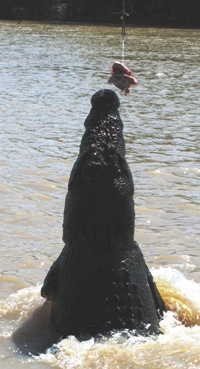 Then head out towards Kakadu about 100km to the Adelaide River crossing where you can join a boat to visit the famous jumping crocodiles. Crocodiles have been known to leap out of the water to snatch an unwary bird off a branch, here they do their leaping to grab tempting porkchops held out for them on a line. Is it a good idea to encourage monster crocodiles to leap out of the water at passing boats? Perhaps not, but there haven’t been any mishaps to date and it’s certainly spectacular. Click here for more on my previous visit to the region, back in 2007.

Heading back to Darwin with out friends we stopped in at the Humpty Doo Hotel for lunch. It’s a down-to-earth outback pub and according to its sign it’s not just ‘famous’ but ‘world famous.’

Maureen and I opted for a ‘Barra Burger with the Lot’ which meant barramundi (the classic Top End fish), topped with pineapple, bacon, egg, cheese and salad including that most important Aussie-burger ingredient beetroot. Between the two of us a single Humpty Doo Barraburger hit the hangover spot, we’d drunk rather a lot at a wedding the previous night.

Finally out at the Kimberley I went fishing. Now I am no fishing expert and to be honest have no real interest in hauling fish on to boats, but if you’re at a place famous for its fishing I guess you have to try it. So here’s the GT – giant trevally – pulled in. We tossed it back and it swum off. 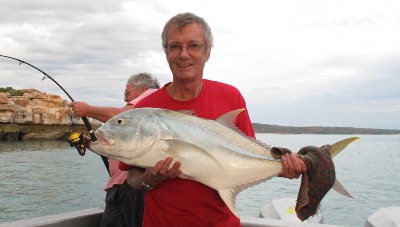