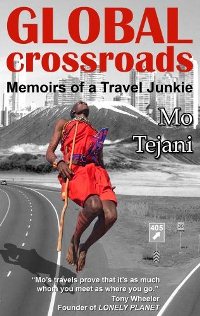 Back in 2006 I wrote a brief review of Mo Tejani’s A Chameleon’s Tale. I commented that Mo’s life was typical of today’s global nomads, living here, connected to there, nationality somewhere else. Although Mo lived in Thailand he started out in Uganda, until his family were thrown out of the country when Idi Amin ejected all the country’s African-Asians. Mo wrote about that in Thank You Idi Amin, a memoir of the Asian Exodus.

Later I wrote a cover quote for Mo’s book Global Crossroads: Memoirs of a Travel Junkie and once or twice a year I’d get a message from Mo, filling me in on where he’d been and what he’d been doing. The most recent one came through on New Year’s Eve, a quick synopsis of 2012. And 24 hours later another email arrived, announcing that Mo had left a New Year’s Eve party in Chiang Mai, continued on to a friend’s house and 2-1/2 hours into 2013 he dropped dead. What can you say – live life for the moment, farewell to Mo Tejani.