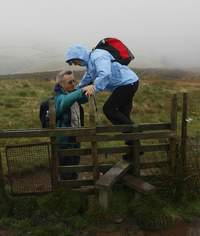 Grey, gloomy, pouring rain. It was good English walking weather when Maureen and I along with three other friends set out from St Bees to cross England. I try to make at least one long walk every year and this year’s stroll was the Wainwright Way, crossing England from the Irish Sea to the North Sea. It wasn’t the first time I’ve dipped a toe in one sea and, later on, the other, but the previous trek was a decade ago along Hadrian’s Wall, a mere 120km. This time the walk was just over 300km and took 12 days.

Alfred Wainwright was an enthusiastic English walker who wrote a series of idiosyncratic walking guides in the 1960s and ‘70s. As we trudged through another muddy boggy stretch of prime English murk we began to refer to the walk as Wainwright’s revenge. By Day 2 the coast was far behind us and we would have been climbing into the beautiful Lake District region. Except it was still raining. Fortunately the downpours halted before we exited the park although I can’t say we really enjoyed what should have been one of the highlights of the walk. If the sun is shining this is English postcard scenery at its best. Villages like Grasmere, poet William Wordsworth’s stamping ground, or smaller outposts like Rosthwaite are a delight. 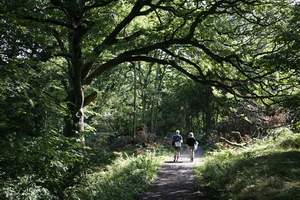 Fortunately the next stretch through the Yorkshire Dales were a delight with a selection of classically picturesque English village like Keld and Reeth. One of our group’s two daughters joined us for this stretch and some raucous nights in English pubs ensured that the walk was a great experience even if the actual walking was not always up to scratch.

The final days featured a condensed version of the whole walk with postcard villages, desolate moors, romantic woods, the railway station from the Harry Potter movie (in Grosmont) and finally the clifftop views before we descended into pretty little Robin Hoods Bay at the end of the walk.

Some highlights and lowlights:

• The ‘carry your bag’ services available along the walk are terrific. No need to carry a heavy backpack, each morning you just leave it at your bed and breakfast and during the day it’s picked up and dropped off at wherever you’ll be staying that night.
• Plan ahead, it can be difficult to find accommodation at some night stops, particularly if you need several rooms.
• There was always a good pub for dinner and a pint at night but in the daytime finding something to eat was often ridiculously hit and miss. England desperately needs some Nepalese tea houses, like you find along every trekking trail in the Himalaya.
• The walk could also do with some more signposting, on some stretches it was amazingly easy to get off the track.
• Richmond, the biggest town on the whole route, with its wonderful market square overlooked by a towering ruined castle, was a highpoint. This would be a great place to factor in a rest day.
• The quaint little village of Ostmotherley was well worth the couple of miles detour off the route and the Golden Lion pub was one of the best places we ate.

Check Lonely Planet’s Walking in Britain book for a good introduction, but for exhaustive detail of the route get a copy of Coast to Coast Path by Henry Stedman or, if you want to go back to source, Wainwright’s A Coast to Coast Walk, the strange book which started the craze. Maps are essential for following the route and the two Harvey maps, Coast to Coast West and Coast to Coast East do the job very efficiently.