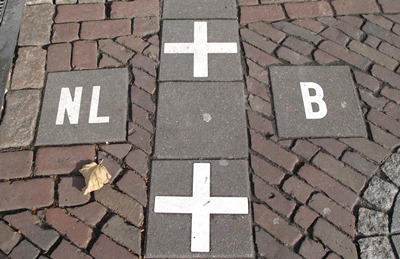 Last year I blogged about visiting the National Library in Canberra, Australia and finding out about enclaves and exclaves along the borders between India and Bangladesh and between Belgium and the Netherlands. While I was in Belgium continuing my pursuit of King Leopold II and his Congo exploits I also made a side trip to the curiously intertwined towns of Baarle-Hertog and Baarle-Nassau. It was a 220km drive from Brussels to the two Baarles and back to the Brussels airport, from where I flew to Hong Kong via London.

Wandering around the town/towns you’ll come across border markings as you cross from one country to another. The official ruling is that the border may run right through your house, but it’s the location of your front door which decides which country the house is in. They seem to have different street numbering procedures in the two countries so red-white-blue 33 in the Netherlands could be right next door to black-yellow-red 3 in Belgium. ▼ 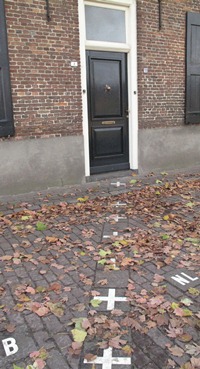 ◄ Of course there had to be one door which precisely straddles the border. The town/towns have two town-halls, two Catholic churches, two fire departments and two police forces although both police departments are in the Belgian Town Hall. They do each have their own desk fronted by a flag so you know if you’re dealing with the Belgian or the Dutch police.