I’m travelling around Laos working on a program for the new LPTV series ‘Lonely Planet’s Roads Less Travelled’. After kicking off in Luang Prabang I took a bus south to Sainyaburi to catch the annual Elephant Festival.

‘Well he was hopeless, wasn’t he?’ she complained.

‘Couldn’t steer straight, kept on veering off in one direction then the other. Couldn’t keep a steady speed either, it was all stop-go, stop-go,’ she continued. ‘Then he drops the brake stick and expects me to pick it up for him. And when we pass by the food stall for the second time, just when I need another bunch of bananas, he can’t find his money. Hopeless!’

That’s what Tongbin, a 16-year old female elephant, probably thought about my skills as a first time elephant conductor, a mahout. At the annual elephant festival in Sainyabuli in mid-February Tongbin was one of the 61 elephants taking part.

They’d trekked in from all around the region, for Tongbin it was a week long march from Hongsa. Her owner Kamphan told me he kept her as a pet.

Some pet, elephants chomp through 100kg or more of food a day, the hand of bananas she’d quickly scarfed down, when we stopped at a food stall to refuel her, were just a useful little snack. Kamphan offered to give me a quick lesson in how to drive an elephant, but I’ll need a few more before I’m OK behind the wheel, or rather behind the ears, you steer an elephant by nudging it behind the ears with your knees.‘ 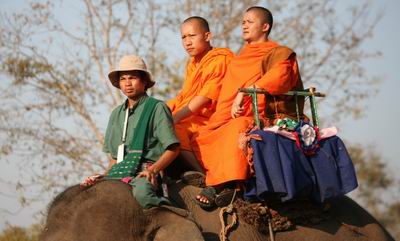 The two day festival kicks off with an elephant parade from the town centre down across the river (bridges? Who needs bridges when you have an elephant?) and then features elephants doing all those standard elephant-like activities: shifting logs around, offering rides to everyone from young kids to elderly monks, picking up money (just toss a 1000 kip note down there and I’ll show you how I can pick it up with my trunk).

The festival is a moveable feast, it’s been held at a different location each year of its three year history. This year it attracted 50,000 visitors, the vast majority of them Laotians and their fellow elephant enthusiasts from nearby Thailand. 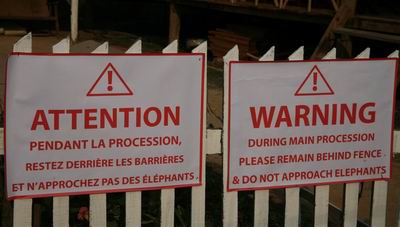