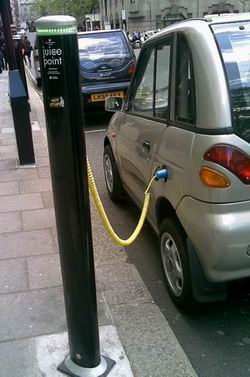 Last month London’s mayor Boris Johnson announced his intention to make London an electric car city with 100,000 electric cars in the city, about 5% of London’s two million cars. Installing 25,000 charging points for electric cars by 2015 would help to meet that target. In 2008 the city of Westminster had already installed 60 charging points, 12 in the street and 48 in car parks. Electric car owners pay an annual £75 to hook up their cars and get free parking while they’re charging. I photographed these two G-Whiz electric cars charging up right outside the London Rolls-Royce dealer on Berkeley Square in Mayfair.

In Los Angeles today I had a quick test drive in a Tesla – the electric-powered rocket ship with a battery pack made up of 6,831 lithium ion cells – not unlike the batteries in your mobile phone or laptop computer. My drive was just a sprint down the freeway and back, but I was sold, I’d have one! 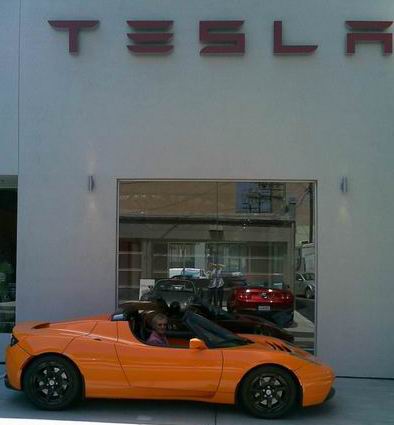 In fact in a fashion I’ve already had two halves of a Tesla. On the go you can see its relationship to the Lotus Elise I used to own in Australia, the LA Tesla demonstrator car was even the same colour as my Lotus:

And when I stopped at the traffic lights it was totally silent, nothing running at all. Just like my Toyota Prius.

Click here for more on my current Lotus – a Lotus Europa – and my Toyota Prius.