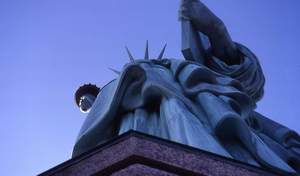 It’s easy to think of the French architect Gustave Eiffel (born 1832, died 1923) as a one-hit wonder, we can all immediately name the Eiffel Tower as his great achievement, but a second or third Eiffel construction? In fact Eiffel architecture is found in many countries and I’m amazed how many times I’ve encountered something Gustave designed or built as I travel the world. 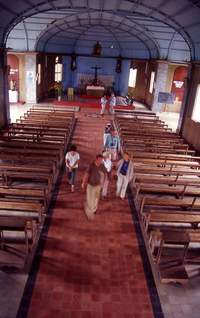 My two most recent Eiffel meetings have both been in Africa. A couple of years ago, travelling upriver in Gabon to the Evangue Island gorilla sanctuary, our boat stopped at the riverside St Anne Mission. Alhough it’s not certain that the mission’s all-metal church is a Gustave Eiffel design it certainly has the Eiffel feel.

Earlier this year I was in St Louis in Senegal and walked across the 500-metre-long metal bridge, the Pont Faidherbe, connecting the city island to the mainland. This one is definitely an Eiffel construction although it was originally intended to span the Danube.

In fact many of Eiffel’s early designs were railway bridges in France, but he moved on to designing bridges in many other places around the world. Although the Eiffel Tower was actually intended to be dismantled after the Paris Exposition of 1889 he also built to last. The Long-Bien Bridge in Hanoi, Vietnam was bombed many times by the USAF during the Vietnam War, but was repeatedly repaired and is still in use today.

internal skeleton of the Statue of Liberty

Over the years he also built observatories, piers, viaducts, hotels, train stations, cathedrals, lighthouses and markets, all with his trademark metal framework and cladding. Apart from his Paris tower my favourite Eiffel construction remains one you’ll never see, from the outside. It’s Eiffel’s internal framework which supports the outer panels of the Statue of Liberty.