I think I’d better drop that line about things not working out as expected. Today would probably have worked out just as expected if I hadn’t asked the best way to the I-93 as we were leaving the hotel. Perhaps the advice to take the I-25 towards LA and cut across to the I-93 was good advice, perhaps he said exit 34 not 24. Whatever, after exit 25 there was no exit 24 and by the time we got to exit 12, the very next exit after exit 25, we were way out of Las Vegas and heading in the wrong direction. It added 60 miles to the trip but did give us a look at the Mojave Desert and the Joshua Tree Highway. 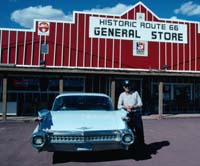 I’ve got to admit we took I-40 eastward, not the longer alternative of the old Route 66, but we did leave the freeway to get food and fuel at Seligman, an old Route 66 town. Mr J’s Coffee Shop has probably remained totally unchanged since Route 66 was in its prime and our waitress’s beehive hairdo would certainly have been the height of fashion when our Caddy was the height of fashion.

Seligman also made me think how gas stations could become one of the pet hates of this trip. Americans get their gas cheap but they certainly pay for it in other ways. Pull into a gas station (or petrol station if you wish) in Australia, England, France, Italy, Japan, you name it in the modern world, and you’re tanked up, paid for and gone in a flash. Do the same thing in the US and you first have to join a line to pay in advance (or deposit your credit card), then go back to fill your car, then go back to tell the attendant the pump is not turned on, then go back and actually fill your car, then go back and queue up again to actually pay for it. This is progress? At least in places like Seligman the gas stations are still old world, you fill it, you pay for it, no messing around.

We finally arrived at the Grand Canyon around 4 pm, checked in to our hotel (the Yavapai Lodge), went walking along the canyon rim, had a drink at the El Tovar and dinner at the Bright Angel. My initial problems with getting these reports home on the Internet seem to have been ironed out and my handy little OmniBook computer and I seem to be becoming good friends.