Travelling with kids is all give and take, we’ll do this, then you can do that. So we start the day by backtracking to Hershey to visit the Hershey chocolate factory. I love factory tours – how does this get made? how are cars made differently in Hiroshima versus Detroit? (not much), what’s the difference between a brewery in Munich and a brewery in Dublin? But the Hershey’s factory tour is a factory tour to give factory tours a bad name. It’s been converted into a fun fair ride, get on the whirling car and the ‘factory’ whirls by you, amusingly, easily, painlessly.

Actually the Guinness brewery in Dublin, which I visited last year, was also a factory tour which never actually visited the factory. But it wasn’t a fun fair ride, which perhaps it could be, we could ride down a bubbling black river of Guinness, conveyed in a floating Guinness barrel boat, with the Guinness factory swirling by us on both sides.

America has lots of the sublime, like Falling Water yesterday, but it’s balanced by the absurd, like the Hershey factory today. Actually to pin that on America is a bit unfair, juxtaposing the ridiculous and the sublime is the late 20th century norm, worldwide. And the whole town of Hershey, with its chocolate kisses street lamps, seems to be part of the fantasy.

From Hershey we take the Pennsylvania Turnpike into Philadelphia, get lost between the turnpike exit and the town centre and end up in a Ramada hotel. For some reason this is the third Ramada hotel of this trip, three times as many as any other hotel or motel chain. It’s also easily the most decrepit place we’ve stayed in this trip, down at heel, frayed at the edges and in dire need of some refurbishment. The window in our room is cracked and when Maureen opens it to get some fresh air in a piece of glass falls out, on to the carpet. 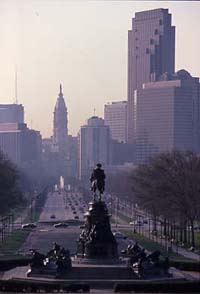 Downtown Philadelphia is surprisingly attractive, this is another place we’d like to have longer to explore. We intend to eat at an Ethiopian restaurant but it’s closed down, although the name is still up. Second choice, a good one, is Mezzanotte, a trendily modern Italian restaurant which tops the list as the most expensive restaurant of this trip but definitely tops the coffee quality list as well.