What a little town Little Rock is. By lunchtime we’re in Memphis and then head for Graceland. The Graceland leaflet warning that it can be hard to find, despite its proximity to the city, turns out to be correct, we end up at the airport, on three different freeways heading in three different directions, and finally find it after asking directions. 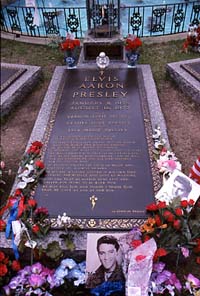 And what a strange place it is. I had this vision of a sprawling southern mansion in expansive grounds. In fact it’s surprisingly small and in a suburban setting of motels, fast food outlets and car dealers. Sure it’s tacky but it’s too small to be over-the-top, inspired tacky. And Elvis doesn’t come over as a huge spender despite all the half-a-dozen Cadillacs-for-friends tales. The swimming pool wouldn’t be out of place in a small suburban house and his 75 Ferrari was bought used in 76. This is not pop-star excess.

Saturday night in Memphis is an uninspiring scene. Downtown is deserted, restaurants are few and far between, the shops not even worth glancing at. The few blocks of Beale St is the only spark of life in the place. In daylight Memphis looks quite fun, after dark, downtown at least, it’s just dull.