My hangover isn’t as bad as it should be and after packing our freshly washed clothes (thank God for friends’ washing machines) we set off for El Paso. Leaving Tucson we drive by the Davis-Monthan air force base where surplus military aircraft are mothballed, just in case there’s another Vietnam war. There are literally hundreds of aircraft, lined up in neat rows stretching for several miles. It’s hard to believe this many weapons were needed in the first place, let alone that there are this many extra unneeded ones. 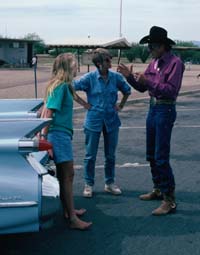 Once on the I-10 we barrel through to El Paso almost non-stop, pausing only for a our first fast-food hamburger stop of the trip at a Burger King and another fill up at a gas station with an awesome display of tacky souvenirs. A New Mexico snowdome is duly bought for Lonely Planet’s world class snowdome collection back in Australia.

Although the Caddy has now covered over 2000 miles I still keep it constantly in mind that this is a 35 year old car and it’s certainly showing its age in a number of areas. I’ve owned several elderly British sports cars over the years so one aspect of keeping old cars going I’m fully au fait with is overheating, a flaw British cars seem to have a lock on. Well the Caddy hadn’t used a teaspoon full of coolant until we arrived in El Paso and parked at our motel. Without any warning as soon as I’d turned it off it suddenly started to boil and spill water and antifreeze over the car park. I couldn’t find any logical reason for this misbehavior and after refilling it everything seemed OK when we went out for dinner (Tex-Mex of course) later in the evening. I’ll be driving with my fingers crossed tomorrow.