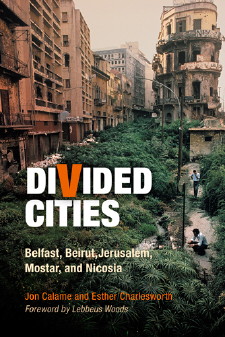 Thursday night – in Melbourne, Australia – I helped launch Divided Cities by Jon Calame and Esther Charlesworth. Published by University of Pennsylvania Press the book looks at the stories of five divided cities – Belfast, Beirut, Jerusalem, Mostar and Nicosia. I’ve visited four of those five cities (Nicosia is still on my ‘must go’ list) and since Maureen is from Belfast I’ve had a long acquaintance with that divided city. 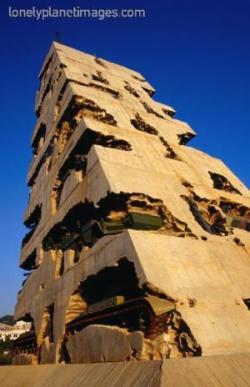 Belfast is far more than Catholics on the Falls Rd and Protestants on the Shankill and it’s amazing how complex the divisions can be in any of these cities. When I visited Beirut a few years ago, and was wrestling with trying to understand the background, I bought a book which listed the huge number of groups – Christian, Muslim, Arab, Israeli, Palestinian, paramilitary, army and civilian – which fought it out over the years.

The Peace Monument in Beirut ►

The book then casually dropped into the discussion the useful fact that during the years of the Beirut civil war every single faction exchanged gunfire with every other faction. On one occasion – after a period of relative calm – a dispute broke out between two paramilitary groups over a queue for the skilift at one of the Lebanese ski slopes. Within 24 hours, as a result of this dispute, shells started arcing over the Green Line yet again.

Not all divided cities are war zones, when I was in school I lived for three years in Detroit – back when the city was a peaceful and prosperous place to live – but at a time when the divisions which have wrecked that city were already incubating. Detroit has become the classic doughnut city, a hollow, emptied out, impoverished centre, divided from prosperous suburbs which have abandoned the centre. I revisited Detroit in the mid-90s, on my coast-to-coast by Cadillac road trip.

When I visit the US today I’m always dispirited to see the development of gated communities, wealthy enclaves dividing themselves off with walls and security gates from their less prosperous neighbours. We should worry anytime we see such divisions springing up. They’re a stepping stone towards the far worse situations this book warns against.