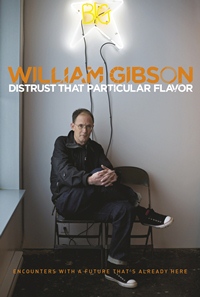 I’ve always loved the travel element of William Gibson’s novels, the use of the weirder corners of our world today as models for a just-around-the-corner future. Distrust that Particular Flavor is a collection of Gibson’s non-fiction – essays, reviews, reports, analyses. It’s not terrific, there’s a slung together feel and it’s really rather thin, but there are some classic pieces, particularly his explanation of why Japan features so often as his view of the future: ‘Because Japan is the global imagination’s default setting for the future’ he explains in Modern Boys & Mobile Girls. His middle-of-the-night jet-lagged wanderings in My Own Private Tokyo was eerily familiar: were those two schoolgirls pretending to be hookers or were they two hookers pretending to be schoolgirls? Hard to tell in Tokyo.

The book also features his classic take on Singapore: Disneyland with the Death Penalty. The Singaporeans didn’t like it. There’s been more Japanese analysis a year after the 11 March 2011 quake, tsunami and near nuclear meltdown. It’s a big question, where is Japan going, or more accurately why is Japan going nowhere? When I visited BMW in Munich last year the BMW marketers were worrying that young Japanese were falling out of love with the car! Simply not bothering to even get a driving license.

Always keen on minting new words which creep into other languages they’ve pinpointed the parasaito shinguru, usually a ‘parasite woman,’ who stays home at their parent’s expense and uses their own earnings for fashion, travel and other personal expenditure. That’s a glimpse of the future which has already spread further, Italians have their bamboccioni, grown-up babies, Germans talk of the Nesthocker (baby bird) who simply won’t leave Hotel Mama. The otaku is a particularly Japanese version of the geek and Japan has also minted the hikikomori, a modern hermit, usually male, who has retreated to his room from where he rarely emerges, perhaps to make middle of the night runs to vending machines. A hikikomori can spend years without ever needing to talk to another human being.