After a week at the TIBE (Taipei International Book Exhibition) I’m doing a quick circuit of the island of Taiwan, down the west coast (heavily populated, flatland down towards the sea) and then back up the east coast (the mountainous side and Taiwan’s big attraction I’m reliably informed).
Today’s travels took me north up the east coast, in miserable wet weather, but past a couple of unusual ‘attractions.’

So it’s up Taiwan’s fabled east coast, from Taitung to Hualien and the even more fabled Taroko Gorge. The coast doesn’t quite live up to Taiwanese propaganda that it’s up there with the great coast roads – California’s Highway 101, Northern Ireland’s Antrim Coast Road or Australia’s Great Ocean Road. Coast roads are all about stunning views, sheer cliffs, stretches of beach, wave-beaten rocks and none of those attributes look as good when it’s grey and miserable, which it was for most of the day. 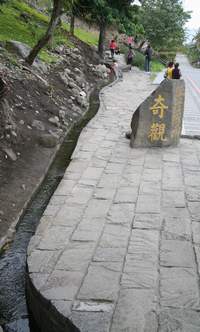 The coast did provide some amusements, like ‘Water Running Up,’ a small channelled stream which definitely appears to be running uphill before it plunges down to the sea. OK there are lots of other illusions like this around the world (most of them your car rolls in the wrong direction), but this is a pretty convincing one, even the photographs seem to look uphill.

Further along is Sansiantai, aka the ‘Platform of the Three Immortals’ with three rocky formations rising from an island just offshore. At some point it was decided to add a bridge so the tourist crowds could get out to the island. Having made that decision the powers-that-be didn’t design something tasteful and minimalist, something that didn’t impact too heavily on the natural scenery. No, they decided to make a red and yellow brick, eight-humped series of arched bridges, reminiscent of a street parade dragon. Merge into the scenery? No way. 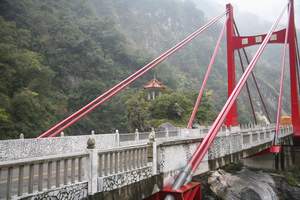 The day ends at the Taroko Gorge, undoubtedly Taiwan’s number one natural attraction. OK it was raining more heavily than ever, but sometimes the clouds and mist simply made it look even more like a Chinese painting and there’s no way around it, this is a something worth visiting Taiwan to catch. I’ve got a room at the Grand Formosa Hotel, looking right out over the river towards a picturesque temple perched on a hilltop. It’s a fine place for my final night on this too-brief Taiwan circuit.

• Day 4 – Across the Island to the East Coast