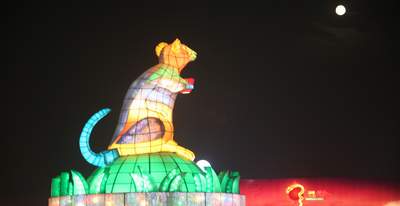 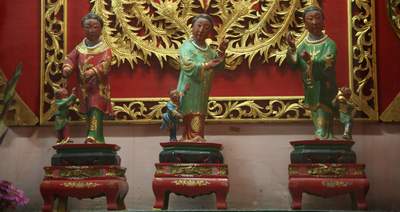 I like Tainan. I spend most of the day walking around the city’s assorted temples and tourist attractions. They include Lady Linshui’s Temple, she’s responsible for looking after children so it’s parents (usually the mothers) who congregate here. Safekeeping children is such a big task she needs 36 assistants, three for each month of the year. The assistant’s little images are arrayed around the temple, three at a time on 12 glass-fronted-shelves.

Then there’s the Wufei Temple to King Ning Jin’s five concubines. Facing defeat and about to commit suicide he suggested, as you do, that they should head for a nunnery. No way they replied, we’re coming too and hung themselves. The temple commemorates their faithfulness.

During my wanders I come across a ‘Blasting Handan’ parade. Handan is a god responsible for good fortune and he likes to keep warm so what better way of keeping him warm than blasting him with firecrackers? And what a great excuse to throw huge numbers of firecrackers around? 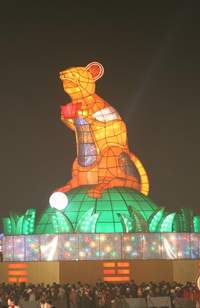 But the day’s highlight was the stupendous Lantern Festival. It kicks off on the first full moon night after Chinese New Year and since this is The Year of the Rat the centrepiece is the biggest, most laser lit, technicolored, flashing, rotating, altogether glorious rat you ever saw.