I can’t ride the narrow gauge Forest Train up to Alishan this morning so instead I take an early morning bus and come back down on the train in the afternoon.

It means I can’t overnight in Alishan, but I do have time to make a couple of short walks including the ‘Giant Tree Circuit’ which takes you by an assortment of big (very big) and old (very old) trees. The relevant ones all numbered, like ‘Tree No 9’. The Japanese, during their occupation of Taiwan, named one the ‘Myriad Years Old’ tree, but it’s been renamed. It may have been old, the sign announces, but it certainly wasn’t a myriad years old.

The narrow gauge Forest Train is Alishan’s big attraction. It takes much longer than the bus (more than 3-1/2 hours versus less than 2-1/2 for the 70km trip), but hey, look at what it does, according to the sign at Alishan station: 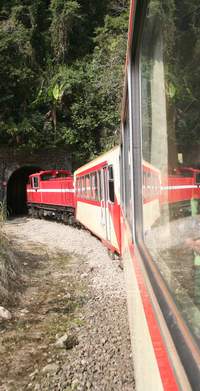 the Forest Train enters a tunnel