Day 1 was a train ride south to Changhua and then a bus to Lugang, a smaller town noted for the ‘best preserved Qing-dynasty temple in Taiwan.’ Unfortunately the Longshan Temple still has a lot of restoration to be completed, meanwhile it’s not that impressive. The Matsu Temple was busier and more interesting, but overall Lugang was not that special, I was soon back at Changhua for another train south.

my train out of Changhua 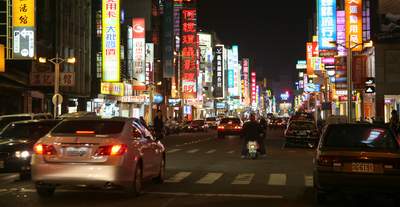 the main street of Chiayi

Fortunately trains come by frequently in Taiwan and the distances are not that great either and I was in Chiayi by late afternoon. Getting a ticket for the Alishan Forest Train tomorrow was my first project, but it turns out the morning train isn’t running at the moment. Never mind, Chiayi is a brightly neon lit place and the town’s signature dish (turkey rice) and later on a beer made things look better. The Taiwanese are definitely not big drinkers, getting a cold Taiwan Beer is not always straightforward.