‘We’re going to try to get out of here before that thunderstorm arrives at the airport,’ the pilot announces.

It was easy to tell which thunderstorm he was talking about, jagged spears of lightning flashed down to the ground off towards Johannesburg.

We were completely in favour of getting out of there as quickly as possible and 10 minutes later the sky was clear, dark and stayed that way. We fell into bed in Cape Town, our room overlooking the Victoria & Alfred waterfront, almost 24 hours after we’d shut the front door back in Melbourne. 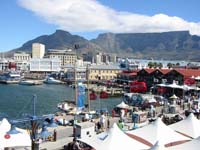 Sunday 6 November
Day 2 – Cape Town, South Africa
We’d visited Cape Town before so our first day in Africa was devoted to de-jetlagging, rather than sightseeing although it was so windy the Table Mountain cable car was closed in any case.

In the morning we wandered the dockfront area, the trendy collection of shops, restaurants and hotels which has become the town’s main tourist attraction, and in the afternoon strolled the streets of the City Bowl.

That evening we met our fellow travellers, predominantly American, with just a small sprinkling of Australians, Canadians, Swiss and a solitary South African. The guides, wildlife and bird experts – I expect a lot of the group will be keen ‘birders’ – are predominantly South African. We also meet the most important man on the trip – our captain John Labistur.

We’re given a quick synopysis of the trip, heading north from the African-Mediterranean climate of the cape through semi-desert, real desert, then increasing vegetation before the tropical rainforest of the equator and then reversing the process before we arrive back in Morocco’s Mediterranean climate. From tomorrow onwards don’t drink the water, take your malarials (last year one member of the party didn’t and ended up with malaria) and don’t expect things to go 100% to plan. Especially in the Central African Republic.