I’ll have a travel blog on a visit to Arnhem Land Aboriginal art sites up in the next few days. I spent a day in Darwin after my Arnhem Land explorations and made a return trip to Darwin’s wonderful Museum & Art Gallery of the Northern Territory 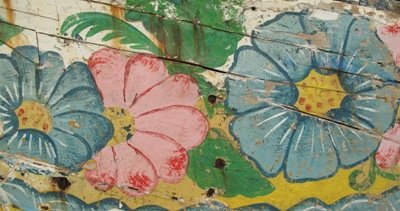 I hadn’t spent enough time on previous visits checking the terrific collection of boats, they range from Pacific Island and Indonesian outriggers to vessels which legally or illegally arrived in the Northern Territory. Terima Kasih (Indonesian for ‘thank you’) turned up legally in 1984, it’s a traditional Javanese perahu konteng, sailed down from Indonesia by a New Zealander and an Australian.

▲ On the other hand this Vietnamese refugee boat arrived in the Northern Territory after the Vietnam War, at a time when many refugee boats fleeing the post-war turmoil in Vietnam turned up in Australia. Today refugee boats generally carry people fleeing Afghanistan and Iraq.

Coincidentally the day I was in Darwin it was announced – to a blaze of publicity – that Darwin was one of the Top 10 Cities in Lonely Planet’s Best in Travel 2012. ABC-TV News and News.com.au were among the media crews to cover the event.