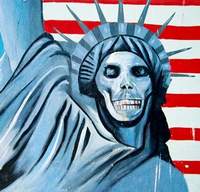 ◄  mural on the wall of the former US Embassy in Tehran 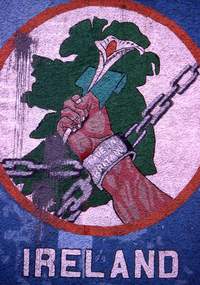 Northern Ireland sectarian
mural  ►
Many very popular tourist sites qualify as ‘dark’ attractions. Cemeteries for example, The Cimetière du Père Lachaise is as one of the most popular attractions in Paris. Chopin, Balzac, Wilde, Proust, Modigliani and Piaf are all buried there, but it’s rock icon Jim Morrison who attracts the big crowds. The Anne Frank House in Amsterdam, the Catholic and Protestant murals which decorate buildings in Belfast, the ‘Topography of Terror’ at the site of the Gestapo Headquarters in Berlin, or Robben Island off Cape Town, Nelson Mandela’s prison for a quarter century, are all important dark sites. Ground Zero, the site of the World Trade Center buildings in New York City, has been one of the most important dark tourism locations ever since the 9/11 attacks.

Dark tourism can also intersect with bad taste. Gracelands, Elvis Presley’s former home, is a classic example. Or try Grūtas Park, also known as Stalin’s World, at Druskininkai in Lithuania if you want to admire a fine collection of Soviet era statuary. I was deeply disappointed that the post invasion chaos led to the destruction of so many fine examples of Saddam Hussein statues, they would have made a fine Baghdad tourist site.

Dark tourism may mean visiting one of those iconically dark sites, but it can also mean participating in aid projects or volunteering at disaster areas. The huge response to the 2004 Asian tsunami disaster was a very positive example of dark travel. These days any major disaster whether it’s Hurricane Katrina in the USA or the earthquake in Pakistan there will probably be a flood of volunteers.