I’ve driven up (or down) the Croatian coast several times over the years, the first time right back in the Yugoslavia era. This time I joined a bunch of friends to make the trip by boat. A series of often overlapping islands sprinkle the length of the coast, spectacular hills and mountains soar inland and a scatter of beautiful towns and ports dot the coast and islands. Throw in clear blue sea and a wonderful summer climate and it’s no wonder there are so many boats in Croatian waters. 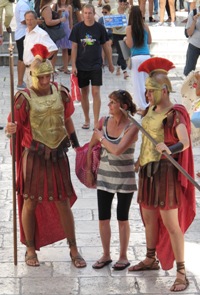 ◄  Our southbound trip started at Split, a beautiful old port town seamlessly melded into the ancient Roman palace, built by the Roman emperor Diocletian in the 4th century AD. The palace was abandoned for centuries and the city grew up in and around the ancient ruins, it’s often hard to tell where Roman ruins end and more modern buildings start. These days, just like in front of the Colosseum in Rome, you’re likely to encounter modern gladiators ready for every touristic photo opportunity. 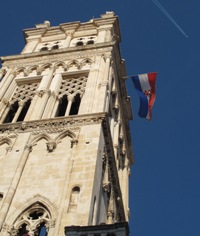 Day 1 was a short trip, just a few km north to Trogir, like Split a walled port town although without the Roman assistance in its construction. The town is dominated by a sturdy old cathedral in the main square, you can climb the tower.  ► 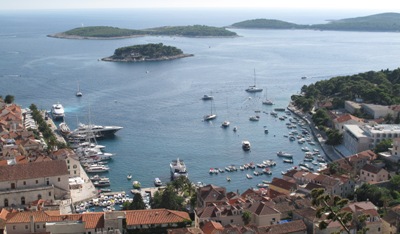 ▲  Next stop was Hvar on Hvar island, the party town along the Croatian coast, Prince Harry had made the news in Britain with some low-level Hvar nightclub misbehaviour a couple of weeks earlier. When the nightclubs aren’t open it’s another picture postcard Croatian port with a fort perfectly placed for looking down on the town and harbour. 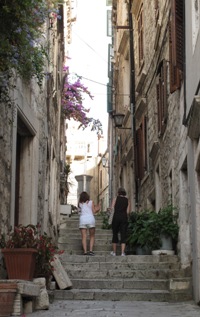 ◄ The next day took us to Vis for a quiet break before making another walled town halt at Korcula. We’d began to realise it was pointless to add that it was a charming  port town, they were all charming! Korcula claims Marco Polo as its most famous citizen and we joked that the claim must be accurate because the town’s Marco Polo Pizzeria is still in business today. Or was it some other food find the European explorer brought back from his famous travels to China in the 1200s?

Our final Croatian overnight halt was off the island of Mjet where we made the short walk across the island to visit the old monastery and the church of St Mary. We cruised close by Dubrovnik and made a brief halt at Cavtat to get stamped out of the country before entering Montenegro. Our first Montenegro overnight was Budva, another old walled port town, but almost overwhelmed by a large and very busy beach resort. It wasn’t our favourite stop.

Finally we made our way up the fjord-like bay which leads to Kotor, which won my coastal beauty contest and clearly deserves its UNESCO World Heritage listing. It’s traffic free, like all the old walled towns, but also overlooked by a long defensive wall which snakes up the hill behind the town, offering wonderful views of Kotor, the bay and the boats moored along the quay and out in the bay. They ranged from little local fishing boats to a couple of big cruise ships.  En route to Kotor we sailed past St George island, and Gospa od Škrpjela – Our Lady of the Rock  ▼

There’s a host of opportunities for sailing the coast from ‘bareboat’ charters where you pilot the boat yourself to skippered boats where a professional crew does all the hard work. Or you can simply jump on the next ferry, fleets of them shuttle between the island or back and forth from the coast