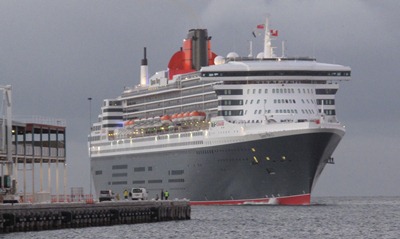 ▲  On 5 March in Melbourne, Australia I got up at dawn and drove over to Port Melbourne to see the Queen Mary 2 arrive in dock. A couple of weeks earlier I’d stopped in at Rabaul on my way through Papua New Guinea, having arrived in the country by a very much smaller boat – powered by a 30 horsepower Yamaha outboard – as part of the back door to Bougainville route from the Solomon Islands. In Rabaul they were talking about the QM2 arriving in their volcano-rimmed harbour in a couple of weeks time. 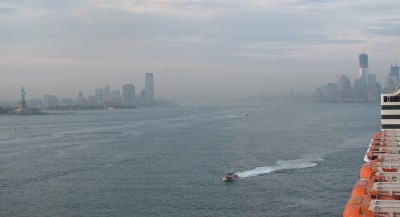 ▲ So it was very appropriate that on 4 May Maureen and I sailed out of New York on the QM2, bound for Southampton in England. These days it’s a 7 day crossing, slower than they used to do it even back in the Titanic days. Speaking of which we passed about 80km south of the final resting place of that iceberg victim. It was 100 years and a couple of weeks earlier that the Titanic went down. We passed even closer to the Andrea Doria which sank back in 1956, we were only about 25km from its location.

The iconic Atlantic crossing is westbound and ends by sailing into New York past the Statue of Liberty. Travelling eastbound does mean you see the statue at dusk, no need to get up pre-dawn for your early arrival. Eastbound also means you have 5 23 hour days, going the other way gives you 5 25 hour days. No big deal, I thought, but it’s surprising how a little bit of jetlag (or boatlag) every day ends up feeling just as bad as one bigger chunk. I was surprised how out of it I felt by the end.

And on board – well you can eat a lot, I put on a little bit of weight even though I tried to avoid over-eating, jogged around the deck every day (1.9 laps to a km, it’s a big ship)  and visited the gym every day. And you drink a lot – a pre-dinner drink in one of the bars, more booze with dinner, a nightcap in another bar. The excellent jazz from the Simon Galfe trio was the best thing on the boat and they seem to have been there for a while, there are YouTube clips of them back to 2009.

Plus you read a lot and if you wish there are lectures, films, live performances, even a casino if you want to lose some money. Meanwhile a lot of ocean passes by although until the last day it was so cold and windy outside there wasn’t much demand for these loungers for watching the Atlantic disappear behind. ▼ 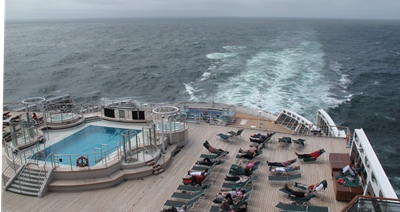 Despite the dressing up – three nights were ‘formal’ – DJs and bow ties for the guys – it was surprisingly unglamorous most of the time. The buffet dining area (there are flash restaurants as well) is more cross-Channel (or cross-Tasman) ferry than international ocean bling.

I didn’t get the New York arrival, but at the other end we came in past the Isle of Wight and the Calshot sandspit that marks the entrance to Southampton Water. My father was from Calshot so it was an area I knew as a child. Despite all that maritime activity on his doorstep Dad ended up in the RAF, not the British Navy.

So an interesting week, something I’ve always wanted to do and now I’ve done it I certainly don’t intend to ever do it again!  Cunard’s pricing policy (you can pay way more booking from some countries than others) is very interesting. More on that in a future blog.