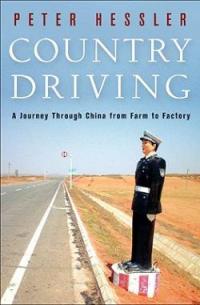 Terrific. Peter Hessler has written the best book I’ve read on contemporary everyday China. Depending on where you see Country Driving it might be subtitled Three Journeys Across a Changing China or A Journey through China from Farm to Factory. Peter, a long term China resident, first as a Peace Corps volunteer and then as a writer for the New Yorker, gets to grips with modern China by driving around. Still a relatively adventurous and new activity for a ‘big nose.’

Part 1 follows his exploratory drives along the Great Wall, but not before he goes through the comic process of getting a Chinese driving licence. Question Number 352 from the driver’s exam:

If another motorist stops you to ask directions, you should:

a. Not tell him
b. Reply patiently and accurately
c. Tell him the wrong way

Renting a car in Beijing is an equally comic process and once out on the road there’s the small problem that he’s breaking every rule in the book about where he’s permitted to drive. ‘You’ve driven all the way to Inner Mongolia (when as a foreigner you’re not allowed to go outside Beijing)?’ seemed to be the regular response when he returned his dented and dinged rent-a-jeep to Capital Motors. ‘Fantastic!’ 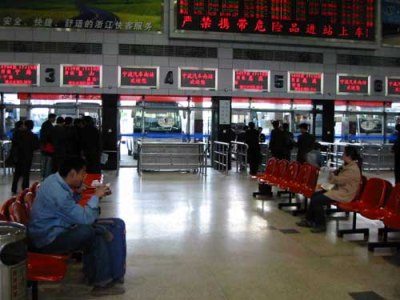 In Part 2 he rents a weekender in a village outside Beijing and then sits back to become part of village life and observe the huge changes in that life. Villages in China in recent decades have undergone the sort of shift that rural villages in the advanced countries of the west would have undergone two centuries ago. The industrial revolution with its dramatic exodus from farm to factory is happening right now in China.

Finally in Part 3 he watches how expressways are revolutionizing China. He picks a town about to be transformed by an expressway that links it to the coast and world markets and again pulls up a chair with a bunch of everyday Chinese and observes first hand and close up the perils and pitfalls of starting up a new factory, whether you’re a nervous businessman betting everything on the next roll of the industrial dice or an underage village girl fighting for her place on the assembly line. 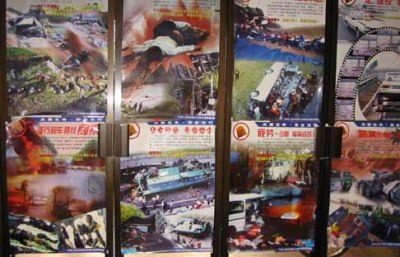 ▲ Bus stations on my trip to Shanghai were often illustrated with gruesome photographs of what might happen if your bus ploughed off the road or had a head on collision!

I had a tiny glimpse of that rapid change when I travelled from Singapore to Shanghai at surface level (and blogged about it) back in 2005. Repeatedly I found myself on brand new expressways on bus trips that only took a third to a half the time my already badly out of date guidebook suggested. Country Driving is a great book, a shame the maps aren’t reproduced at a size that would make them readable.