My final stop in my brief circuit of Costa Rica was at another beach spot. I’d taken the high speed boat that rockets across from the beach at Montezuma to a beach a few km north of Jaco. We encountered a school of dolphins half way across. 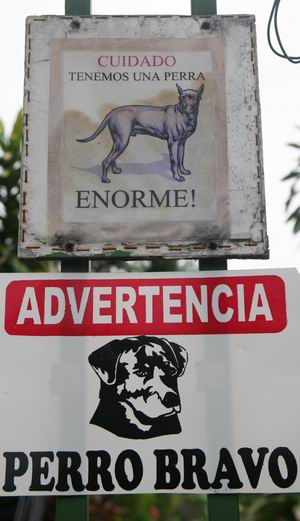 From there I continued south to Quepos where I tried a night at the Wide-Mouth Frog Backpackers, it gets a rave in our Costa Rica book so I thought I’d check it out. It’s good!

From Quepos a bus service shuttles north a few km to Manuel Antonio and its popular little national park. I wasn’t so enthusiastic about the park (it could do with some love and care) or the resort huddling up to the park entrance, but never mind I’d enjoyed my Costa Rican travels. I did see plenty of wildlife in the park including lots of lizards (one really big one), agouti (think of a rabbit-size tail-less rat) and white-faced capuchin (some of them amazingly nonchalant about my presence only cm away from them).

On my way back to Quepos I stopped for a look at El Avion Bar. It features a Fairchild C123 military cargo aircraft (think a smaller, older, twin-engined Hercules), the sister aircraft to one of Ronald Reagan/Oliver North’s Iran Contra aircraft which got shot down over Nicaragua in 1986. One of the crew – Eugene Hasenfus – parachuted out (the flight crew were killed) and his capture by the Nicaraguans blew the cover on the messy affair. I have a beer to note this reminder, once again, that one man’s freedom fighters (in this case Mr Reagan’s) are another country’s terrorists.