Why has it taken me until 2009 to finally visit Costa Rica? It’s been our best selling guidebook in the Americas for years and yet for some reason I’ve never been here. Never mind, I’m sitting watching a full moon over the sea at Montezuma and contemplating that I was there in Kuta (Bali) in 1975, Goa (India) in 1977, Hikkaduwa (Sri Lanka) in 1979 and Phuket (Thailand) in 1981. And now I’m in Montezuma (Costa Rica) in 2009. None of those places were starting out on those years, they were already well down the road. But in Montezuma I’m the oldest person in town!

Never mind, I’ll come up with more on Costa Rica over the next week or two. Meanwhile like everybody else I felt obliged to do a canopy trip and ride a zip line while I was up in Monteverde.

They’ve laid cables from one tree or platform to another, the longest over half a km. You put on a harness and they clip you on to the cable and away you zip: 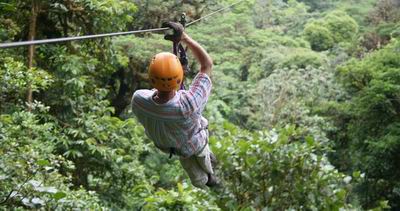 Racing through the jungle:

and disappearing into the distance: