American photographer Taryn Simon spent a week at New York City’s Kennedy Airport photographing items confiscated from arriving passengers or at the post office where arriving mail is inspected. Contraband uses 1075 of those photographs and having done a circuit of Northern Hemisphere galleries it’s now (well around 500 of the images) at the Anna Schwartz Gallery at 185 Flinders Lane in the centre of Melbourne, Australia until 1 June 2019.

The seized goods comprise all the usual suspects: fake watches and handbags (Patek Philippe and Louis Vuitton make their expected appearances), drugs and banned pharmaceuticals, counterfeit American Express travellers’ cheques, weird and wonderful foodstuffs (fat, deer blood, the odd duck tongue), plenty of cigarettes and lots of pirated movies and music. Her week at JFK is now 10 years ago, presumably the movies and music arrive as illegal downloads these days rather than on DVDs and CDs. There are also lots of less expected goodies, illegal drugs sure, but bongs? Poor old Cuba gets whacked as usual, despite arriving at his namesake airport JFK’s favourite cigars are still confiscated. Lots of animals (snails, butterflies) or parts of animals (skeletons, bones) are grabbed, even a dead bird that would have been used in some witchcraft ceremony. Everything is labelled ‘abandoned’, ‘illegal’, ‘unlicensed’ or ‘counterfeit.’ 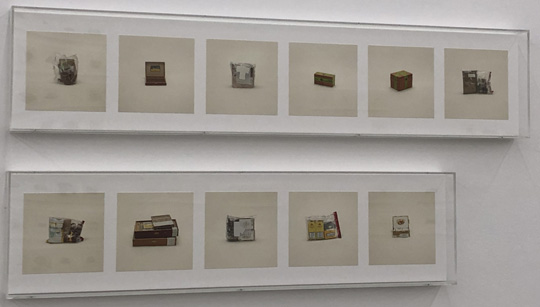 So fascinating, but also rather disappointing, the photographs are all artily small and unfocussed and as a result half of the images you can’t even discern what they’re of and the other half you’d really like to see in more detail. I’d prefer the high resolution version.