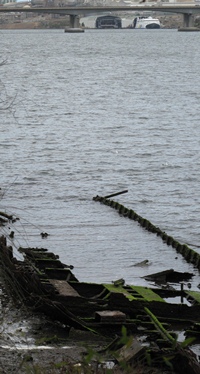 Joseph Conrad – author of Lord Jim and Heart of Darkness (the literary inspiration for Apocalypse Now) only had one ship command during his nautical career. In 1899 the sailing ship Otago put in to Bangkok when its captain died. Conrad assumed the command and sailed the ship to Singapore, Sydney, Melbourne, Mauritius and Adelaide where he left the ship and concluded his sailing career.

The Otago sailed on for a few more years before becoming a coal hulk – a stationary storage vessel. In 1931 it was dumped at Otago Bay on the Derwent River in Hobart, the capital of the Australian state of Tasmania. Today there’s just some rusting wreckage of the hull lying bow in to the riverside.

The vessel’s timber hatchway can be seen in Hobart’s Maritime Museum, the stern is in Los Angeles and the ship’s wheel is in London.

MONA – David Walsh’s wonderful Museum of Old & New Art – is directly across the Derwent from the remains of the Otago and looking along the hull you can see a modern maritime site across the Derwent as well. It’s the Incat site where giant catamaran ferries are constructed before they sail off to transport passengers and vehicles on operations all over the world.