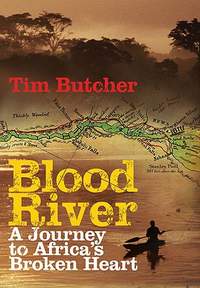 Of course the great Congo novel, Conrad’s Heart of Darkness, travels up the mighty Congo River, but tough travel seems to be a major part of every Congo story. A recent bestseller Tim Butcher’s Blood River crosses Congo from east to west in 2006 in the author’s heroic attempt to follow Henry ‘Dr Livingstone I presume’ Stanley’s crossing in the 1870s. 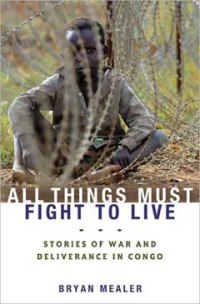 Bryan Mealer’s All Things Must Fight to Live sets out to cover current events and history, but includes two amazing Congo trips. First he attempts to travel up the Congo River in 2006, a trip which ends with an epic eight day bike ride from Bumba to Kisangani. After the horrors of that journey a little train ride in 2007 from Lubumbashi to Kalemie on the recently reopened railway line should have been a breeze. It certainly didn’t turn out that way.

Even flying around the Congo can be testing, read William Langewiesche’s ‘Congo from the Cockpit’ in the July 2007 issue of Vanity Fair. For the past six weeks I’ve been following another epic Congo journey as a young Belgian couple, Josephine and Frederik, haul their Toyota Landcruiser from Lubumbashi in the south-east corner of the country to Kinshasa, 2300km away.

Well it’s 2300km on the map, check any good atlas and you’ll find Highway N1 making its way resolutely across the continent between the two cities. Josephine and Frederik’s journey proves that lines on maps and reality at ground level are two entirely different things. The journey from Lubumbashi via Likasi – Kansenia – Luena – Kamina – Kimpanga – Mwene-ditu – Mbuji-Mayi – Kananga – Kakenge – Ilebo – Kikwit to  Kinshasa takes them over 40 days, covers 3067km and batters their poor Landcruiser into submission. The trip grinds to a halt in Kikwit for a spell while parts for their shattered differentials are procured in Kinshasa. 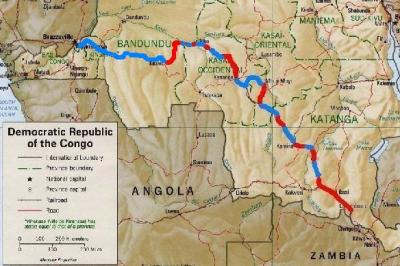 ▲ Their route across the country


They divert off the N1 route at Kananga on to the N41 and N20 to Kikwit because the ferry at Tshikapa was out of action. In fact road ‘numbers’ have no relevance at all, much of their route could only be described as ‘impassable.’ Their journey – with many photographs of their poor car suffering yet another assault which no Toyota nightmare could conjure up – continues for 15 pages on the Horizons Unlimited website. It’s an amazing account of travels in a country which for many years has been a textbook example of somewhere not in the ‘developing’ world, but in the ‘undeveloping’ or ‘de-developing’ world. A place which has gone backwards.