I’ve been kicking around Congo DRC with a sidetrip to the other Congo, Congo Republic (aka Congo Brazzaville). I’ve covered Lubumbashi, Kinshasa, Brazzaville and Kisangani and my final stop was Goma, right on the border with Rwanda.

Visas are the big problem for visiting Congo DRC, they don’t hand them out easily. In particular they don’t like to give them to you away from where you live. Which is a big problem if your own country doesn’t happen to have a Congo DRC diplomatic office, like Australia or New Zealand. Go to Beijing seems to be the suggestion for Australians and New Zealanders. If you do get manage to get a visa in a neighbouring country, like Uganda, there’s always the possibility that it might get rejected at the border. The same thing has happened with visas from Kigali in Rwanda.

You can get visas at the popular Gisenyi-Goma border between Rwanda-Congo DRC. Travellers cross the border here to climb the spectacular Nyiragongo Volcano with its active lava lake and to track gorillas in the Virunga National Park. A year or so ago a visa at this border cost US$35, now it’s US$285! And another US$20 to a fixer (a protocole) might speed up delivery. And after all that the visa is only valid for a week and is only for the Goma region, it does not extend to the rest of the country. 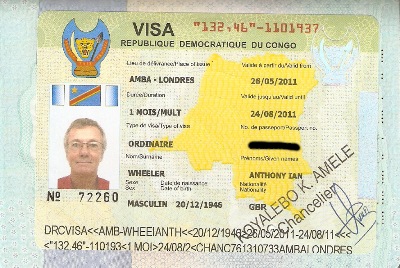 I got my visa in London and, surprisingly, without any difficulty. I showered them with paperwork forms, photocopies, itineraries, flight bookings, hotel reservations, bank statements although I didn’t supply a ‘letter of invitation.’ It cost me £90 for a one month multiple entry visa which I used to make a sidetrip to Congo Republic (Congo Brazzaville), I could have had a single entry visa for £60. 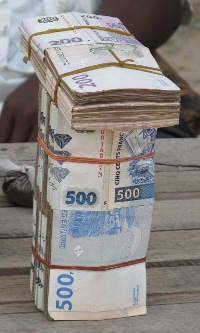 Money
I found ATMs in the big cities – Lubumbashi, Kinshasa, Kisangani and Goma – which dispensed US dollars without difficulty. Rawbank seemed to work most reliably. Once you’ve got US dollars you can then swap them for Congolese francs (CF) with money traders who seem to be on every street corner sitting with bricks of local currency. Since the biggest CF note is just 500 CF (about US$0.55) changing US$20 gives you 38 500 CF notes, about as much as you comfortably stuff in a pocket. 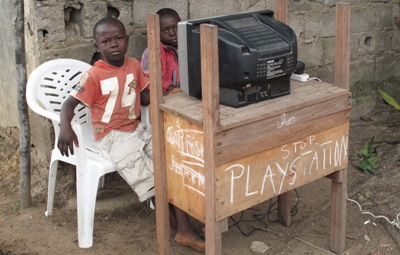 Phones, Internet
My Australian and my UK mobile phone both roamed happily around the Congo, but I also laid out 500 CF for a local Airtel SIM card. And that included 500 CF of calls! Money changers often also sell top up cards and so do plenty of other people. Local residents often tote several mobile phones as coverage seems to vary from one mobile operator to another and you may not be able to call some mobile networks with a phone from another network. On the other hand I found a signal right on top of the Nyirangongo Volcano.

There are plenty of internet cafes around and although not lightning fast the connection seemed pretty good. Most hotels I stayed in offered free wifi or broadband connection.

Safety, Security, Scams
Major security concerns in Congo means violence from remnants of assorted rebel groups and private armies. Much more of the country is now secure, but always check before you set out to travel between cities.

Minor security concerns are muggings, robberies, pickpocketing, but I had absolutely no problems during my short visit. I tried to avoid walking around towns at night, there’s a real shortage of street lighting so they don’t feel too safe. Nevertheless I wasn’t ultra-careful, if it was only a few blocks I’d walk even if it was dark.

And then there’s the police, Congo DRC has far too many police and since they’re not paid much, if at all, make ends meet by hassling people. It felt like every taxi trip I took was stopped somewhere along the way and after one driver paid off a cop because he’d ‘forgotten’ his driving licence, he admitted to me that he did have his licence, but didn’t want to hand it to the cop, ‘because getting it back might be really expensive.’

▲ A Kisangani bar, photographing this sign got me arrested.

Photography
Taking photographs can be a big problem and there’s lots of advice to just forget about it, put your camera away while you’re in the Congo. I used a small camera as surreptitiously as possible, I’d keep it in a plastic bag and just whip it out, take the photo, stash it away again. Which worked fine until I got to Kisangani when a big guy stormed over and told me I’d done something wrong. A second guy quickly joined in and then a third started shouting at me as well. This is pretty standard stuff, so before a fourth and fifth could join in I said ‘let’s go to the police station,’ where, of course the police had no interest in the matter at all.

We then adjourned to the head cops office, watched the Congo-Cameroon football game for awhile, phone calls are made and eventually I drive away with Lydie Aganano, she’s the Chef de Division Unique at the Hotel de Ville (Town Hall) and she drops me back at my hotel. An hour and a half wasted, but an interesting hour and a half and zero cost. Apart from the three guys who did the initial ‘citizen’s arrest’ everybody was polite and friendly.

Next morning I turned up at Ms Aganano’s office to apply for a photo authorization permit. Of course nobody had ever applied for such a thing before, but eventually the local ‘Communication & Media’ office created one, we bargained a bit on what it should cost and I paid them US$20. The permit worked like a magic charm, nobody in Kisangani complained anymore so I never got to pull it out and say ‘look here, this says I can take photos.’ 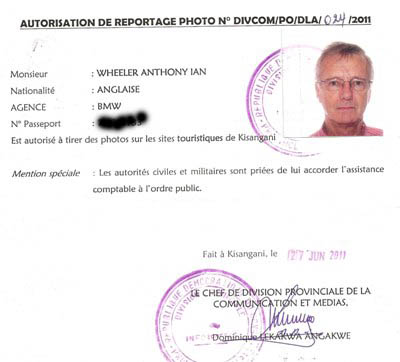 Of course taking photos of bridges, the army or the police would never be a good idea. Or of the Congo River in Kinshasa (it’s wide, brown and wet). The reality is there’s probably no regulation saying you can’t take photographs, it’s just another way of extracting money from somebody. 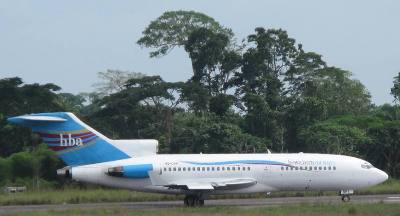 Travel
Hewa Bora (Good Wind in Swahili) is the main domestic operator and although their aircraft are all pretty old (30 year old MD82s – ie DC9s and a 46 year old 727) I had no problems with their flights. Most of them left and arrived ahead of schedule. It makes life a lot easier if you only have carry on baggage, the way people wrap up checked baggage makes you think it’s not 100% secure!

Railways are reopening and there’s extensive road works going on, which basically means roads which were completely impassable are now merely bloody awful. Click here for a harrowing tale of driving between Lubumbashi and Kinshasa. Or try this one for an interesting account on Thorn Tree of travelling the same route on a mix of public road transport and the train service. 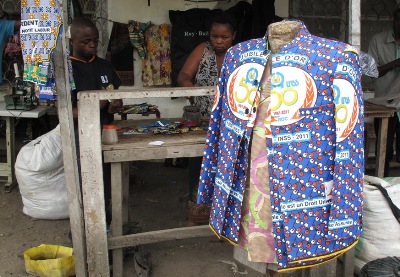 Sharp Dressing
I didn’t do any shopping in Congo DRC, but if I’d found this tailor in Kisangani a day earlier I would have got him to run me up a Congolese jacket. They’re sharp dressers, check Gentleman of Bacongo, about les sapeurs of Brazzaville, the elegantly dressed members of La Societé des Ambianceurs et des Personnes Élégantes,  Congolese women can look pretty sharp as well, if the world ever needs another Naomi Campbell-style supermodel there are plenty of candidates in Congo waiting to step into her high heels.