I’m travelling around Colombia, a country which travellers are starting to discover, now that the drug guys are keeping their heads down and the rebels have retreated into the jungle. In the rest of the country the main danger, the Colombian tourist board suggests, is that you might want to stay longer. I’ve been travelling along the Caribbean coast between Santa Marta and Cartagena. 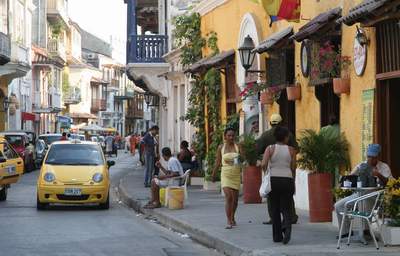 Cartagena
The country’s main port Cartagena is one of those places where you get the distinct feeling the postcards came first, the real city followed later. Surrounded by an imposing city wall the neat grid of the old city is all balconies with flowers positively cascading down to the streets. You’ll find boutiques and galleries, emerald shops and bars, restaurants and clubs. Throw in a collection of squares with heroic statues peering out from the greenery and some imposing churches and this is a great place to simply wander. 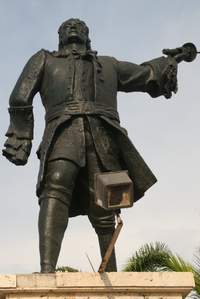 Is this the real ‘Brave Knight’ from Monty Python?

Remember Monty Python’s ’brave knight’ who kept wanting to fight on, even after he’d had both legs and both arms chopped off? Perhaps he was based on Blas de Lezo. Cartagena’s English pirate problems kicked off with Sir Francis Drake in 1586 who demanded (and got) 10 million pesos just to go away. In 1741 Edward Vernon turned up with 186 ships and 25,000 soldiers only to be beaten back by Blas de Lezo, who had already lost an arm, a leg and an eye defending Spanish interests. This time he lost the other leg as well and you’d swear his peg leg statue, waving an empty sleeve at the British scoundrels is also sticking its tongue out.

Fat and proud of it the Colombian artist’s statues and paintings are found all over the country including the square in front of Cartagena’s Church of Santo Domingo, where this reclining nude was getting a wash and polish early one morning.

Taganga
Just a few km outside Santa Marta the little fishing town of Taganga has become a backpackers centre where scuba diving is the big attraction. Every morning a half dozen dive boats pull out from the beach to head for nearby dive sites. 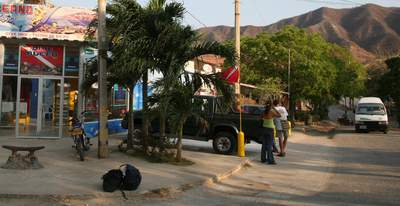 Leaving Taganga, my bags on the sidewalk, the bus coming down the street