Coast to Coast by Cadillac

In 1994 I drove coast-to-coast across the USA (and back again) in an ancient Cadillac and posted a daily blog as we went along. Looking back at that blog, 11 years later, I’m amazed how nonchalant we were about our Detroit chariot’s awesome fuel consumption. But check The Damage We Did in the Causes section of my site for my current concerns about sustainability and fuel consumption. 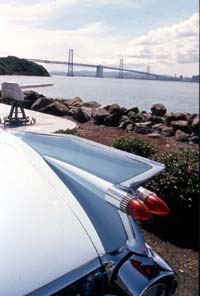 Day 0 – San Francisco
Tomorrow I pick up Maureen and our children from San Francisco Airport and we set out to drive coast to coast, Pacific to Atlantic, in a ’59 Cadillac. Why are we doing this trip? And why on earth in a 35 year old car which needs a Mack truck size parking space and probably gets about 10 miles per gallon? To answer those questions I’d better go back in time.

I’m an Australian, now, but I started out English, a post war baby boom arrival in the south coast town of Bournemouth. England didn’t remain home for long, however. My father left the RAF after the war and joined British Airways, which had just changed its name from Imperial Airways to BOAC, British Overseas Airways Corporation. And overseas we went, his first job was in Karachi, Pakistan and that’s where I spent the first five years of my life.

There was a brief interlude in England, when I started school, but then we went to Nassau in the Bahamas where I did my next couple of primary school years. Then it was back to England again for a couple more years followed, in 1957, with another international transfer. This time to Detroit. So that explains the Cadillac. In late 1958, when the mighty tail fins of my Caddy first cleaved the Detroit air, I was an 11 year old, living in Detroit (not a bad place in those days) and those new space age Cadillacs looked fantastic.

From Detroit my family moved on to Baltimore and then, half way through my 11th grade year, back to England again. Let’s say I had a very mixed education. So I finished school in England, went on to university (engineering, which just might come in useful on this trip), worked for a couple of years, went back to school again, got married and sort of dropped out.

In 1972 Maureen and I set out from London in a Minivan we’d bought for $150. We drove it across Europe, and then through Turkey and Iran and into Afghanistan, where we sold it for a $5 profit. We continued through Pakistan and India then up into the Himalayas to Kathmandu. From Nepal we went back into India, took the only flight of the entire trip from Calcutta to Bangkok, hitch-hiked down to Singapore, took a boat to Jakarta in Indonesia and went down through Java to Bali.

One day in a beachside restaurant in Bali’s Kuta Beach we overheard a New Zealander saying he just needed two more crew and he would sail for Australia. Three weeks later we stepped ashore on a beach on the remote north-west coast of Australia. We hitch-hiked again, 1000 miles south to Perth, met an Australian air force guy driving home to Sydney for Christmas and finally finished our trip the day after Christmas 1972. We’d spent six months ‘on the road’, the most fantastic six months of our lives, it had cost a total of about $1000 and we had precisely 27 cents left. We got $20 for our camera from a Sydney pawn shop and soon had jobs, an apartment and an old car but that trip had changed things, we weren’t going back to the 9 to 5 life.

We soon didn’t have to. I wrote Across Asia on the Cheap about the Asia overland trip, our publishing house Lonely Planet was born, we followed that with South-East Asia on a Shoestring and 20 years and 120 travel titles later we’re about to set out to drive east.

The funny thing about travel is the world doesn’t get smaller. The more places you go the more places you realise you haven’t been to. A couple of years ago I drew up a five year wish list, 15 things I really wanted to do. Some were places  I wanted to go to – I’ve subsequently been to Angkor Wat in Cambodia but I still want to visit Damascus in Syria. Some were walks – I still want to walk the Mt Blanc circuit, the Annapurna circuit and the Mt Kailash circuit. And some were drives – I wanted to drive across the USA, coast to coast. Doing it would be fun, doing it in a ’50s dreamboat would be even more fun. So tomorrow I pick Maureen, my daughter Tashi and my son Kieran up at the airport and we turn the nose of our baby blue lead sled eastwards.