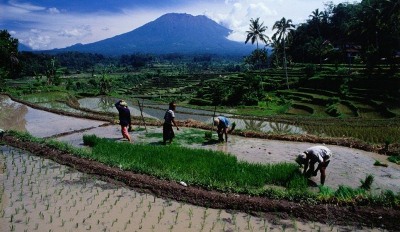 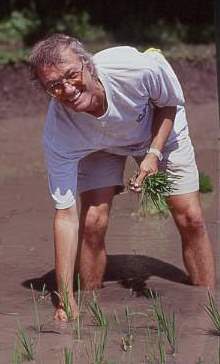 ▲  For our 2004 book Rice Trails – A journey through the ricelands of Asia & Australia –photographer Richard I’Anson and I wanted an iconic photograph of Balinese rice farmers working on their fields with the island’s holy mountain, Gunung Agung, towering over them in the background. Of course you need all the elements to come together, the farmers, the view, the weather, but we eventually got what we were after.

◄ And the farmers invited me to join them and have a go at planting out the seedlings.

I’d always wanted to climb Agung and on a visit to Bali this week I finally got around to it. Lots of visitors climb Mt Batur, the 1717 metre crater-within-a-crater in the centre of the island. You can zip up from Ubud in the night, climb up for the sunrise in a couple of hours and head back to Ubud soon afterwards. Some Batur climbers stay at one of the lakeside guesthouses at the foot of the volcano before their climb.

Climbing Agung is a more serious effort, particularly if you want to get to the highest point on the crater rim at 3142metres. To accomplish that you need to start from Besakih, Bali’s most holy temple, at around midnight to be up at the top at 6am for dawn. You will have climbed 2000metres from your 1100metre high starting point.

I chose the easier option, starting from the Pura Pasar Agung temple north of Selat. I was picked up from my hotel in Ubud at midnight and at 130 am lined up in the car park below the temple at 1572metres. Despite the less than perfect weather (it was the wet season) there were a surprising number of climbers. My guide Ketut and I teamed up with four other climbers and their two guides, both of them young women, and we stuck together all the way to the top. A couple of other climbers were already there when we reached the crater rim at 530 am, after 4 hours climbing. 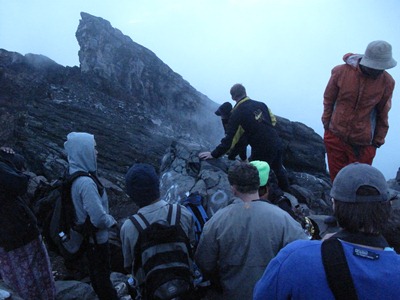 ▲ It was already starting to get light and by dawn there were about 15 of us perched on the rim. My GPS said we were at 2873metres, so more than 250metres below the highest point, which we all agreed seemed distinctly unlikely! Perhaps Agung really is somewhat lower after the 1963-64 eruptions. It’s still classified  as an active volcano, but has not had a serious eruption since that series which killed nearly 2000 people. It’s not possible to make your way around the rim from our point to the highest point, but volcanoes aren’t like mountains, I reckon just getting up to the crater rim is good enough. 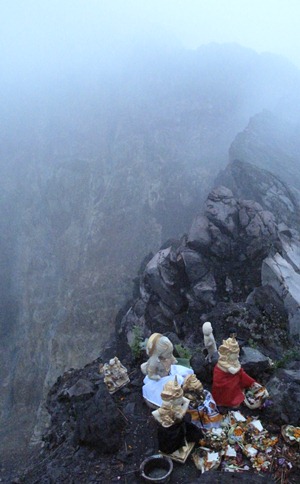 ◄  Offerings and statues perched on the rim of the crater.

An hour later, we seemed to unanimously agree it was time to head down, the visibility was less than perfect and it was cold and windy on the top.

As often happens with mountains it was harder getting down than going up, the descent only took 2-1/2 hours, mostly because we made no rest stops on the way down, but I doubt we moved any faster. Agung is not a technical climb in any way, but it’s often more a clamber than a walk and it can be very slippery. 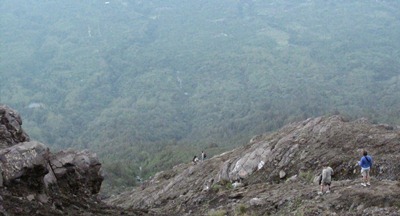 It’s also utterly relentless, climb-climb-climb then descend-descend-descend, there’s never a moment’s level break. I’ve climbed higher and made equally long ascents and descents in one go, but I don’t think my legs have ever been so tired. I was beginning to stumble by the time we got back down to the car park, one ankle didn’t feel right for the next 24 hours and two days later my legs are still aching.