My first view of Mt Kilimanjaro, flying in to Dar es Salaam on a British Airways 767 out of London. It was great to see the snow-capped volcano cone poking through the top of the clouds. 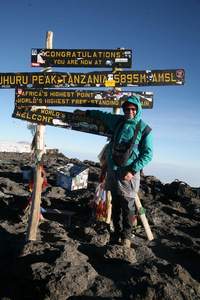 Two weeks later, I’d made it to the top of Africa. And yes there’s still a lot of snow on the summit. My group of friends, four female, one other male, plus me, took seven days following the Machame-Mweka Route. It’s a popular route to the top, but not the really popular one, that’s the Marangu Route.

The advantages of the Machame-Mweka Route are that it takes a bit longer, so you have more time to get acclimatised, and it takes different routes up and down, so you get a little different perspective on the way down.

It’s also a very fast descent, we left the top of Kilimanjaro at 5896m (according to Lonely Planet’s Trekking in East Africa, 5895m according to the sign on top, 5898m according to my GPS) a couple of hours after dawn on Day 6 and not much over 24 hours later we were back at 1600m, having descended half the height of Everest! 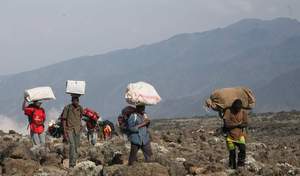 Trekking in East Africa is very similar to trekking in Nepal – complete with guides, porters and tents – with the easily visible difference that the porters carry the loads balanced on their heads, not in a basket with a tumpline across their foreheads. 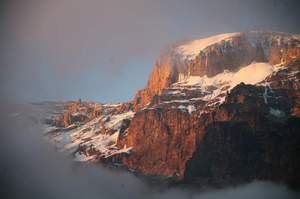 We had some great views of the mountain during our climb, like this sunset view from our camp at Barranco Hut. 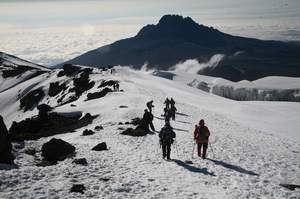 On the final morning we started off at midnight and at 6am arrived at the snow-capped crater rim, then it was just another hour round the rim to Uhuru Peak, the highest point in Africa.