My other blogs from Laos are on the 100 Waterfalls, the Sainyaburi Elephant Festival and Back to Luang Prabang.

It’s always exciting visiting somewhere that’s not yet on tourist itineraries, particularly somewhere that hasn’t even made it into a Lonely Planet guidebook! In late 2008 the German Northern Lao European Cave Project explored a new cave near the village of Chom Ong, about 45km from the town of Udomxai. Of course to the local villagers the cave system had been known for years, but to outsiders it was very definitely pioneering territory.

Siegfried Moser from the German Development Service, who is working with the Udomxai tourist department, took me and Lonely Planet’s Roads Less Travelled TV crew to explore the caves. It took a couple of hours to drive to the village of Chom Ong, the last five km along a road steep and rough enough to make 4WD a necessity. With local village guides there was then a 45 minute walk, and some rivers to cross, before we reached the cave mouth. 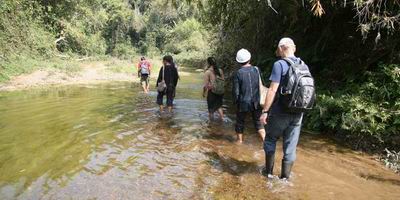 Crossing a river on the walk to the cave entrance.

The main passage of the cave is simply stunning, a vast chamber soaring 35 metres, more than 100 feet, above our heads and running off into the mountain like some gigantic natural subway tunnel. We followed this huge cave for 850 metres before reaching a T-junction.

The main cave is a stunning 35 metre high tunnel into the mountain.

Here the main cave headed off to the right while we followed a smaller cave to the left. There was much more climbing over or clambering under obstructions along this route, but after another 400 metres the cave floor simply dead-ended at a balcony overlooking a river, 15 metres below us. From that spectacular conclusion to our exploration we U-turned and made our way back to the entrance. We’d been underground for over five hours. 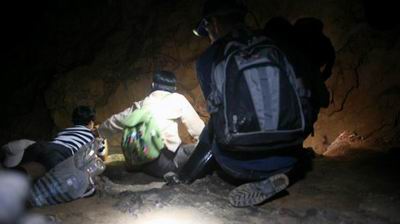 At the end of the smaller cave we gazed over the edge at the river below.

Our visit was just a taster, the cave exploration group mapped over 10km of caves in the system. It’s hoped that the Chom Ong Caves will soon be open to regular visitors and the Chom Ong village has already set up a simple guest room at the village. Check with the Udomxai tourist office for more details.