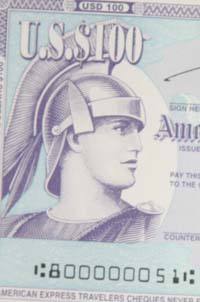 Ever wondered why travellers cheques are dying out? I’ve been carrying my last four American Express US$100 TCs round for several years now without ever finding a reason to cash them. Observing a Nepalese friend trying to cash one in Melbourne (modern city, population 3 million, packed with overseas visitors for the Commonwealth Games) underlined why they’re disappearing:

• National Bank branch – would not cash it, ‘if you had an account here we would cash it for you’!
• ANZ Bank branch – ‘I don’t have the exchange rates at this terminal, if you’d like to sit and wait we’ll call you when they’re available.’
• Westpac Bank branch – ‘Certainly, but there will be an A$8 charge’. For cashing a US$100 cheque!

Eventually I took my friend to an American Express travel agent (Hawthorn Travel) who cashed it quickly, efficiently and without charge. But overall why bother, most of the time it’s much quicker and cheaper to use an ATM.