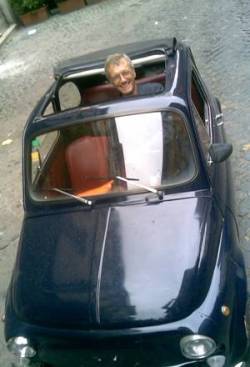 The year’s two most interesting cars? The ones I would happily find a space for in my garage? An electric Tesla sports car which I had a short drive in while I was in Los Angeles. And one I didn’t even drive, but I certainly enjoyed being taken for a quick dawn spin around Rome in a very original old Fiat 500 – not the new retro one. I was shooting a TV commercial for LPTV. See that blog for more original Fiat 500s.

in an electric Tesla in Santa Monica ▼ 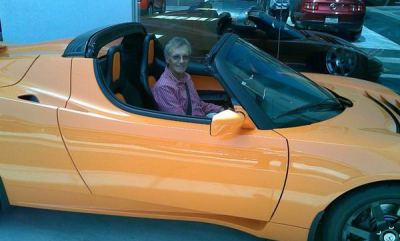 No change to the Wheeler family cars in 2009 – Maureen still drives a Mini, I still drive a Lotus Europa and if there’s more than just the two of us then it’s a Toyota Prius. I wrote about those cars in my Cars & Drives of 2008 blog. A year later the Prius computer is still telling me it’s averaging around 5.4 or 5.5 litres per 100km (53 or 54 mpg in England, 47 or 48 mpg with the slightly smaller US gallon) 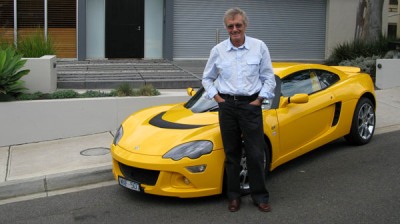 Apart from those cars I’ve driven 8 different rent-a-cars during the year ranging from the instantly forgettable (a Nissan Note, a Suzuki Swift, a Toyota Corolla) to the embarrassingly ugly (a Dodge Charger) – see my ugly cars blog for how I ended up behind the wheel of a Charger and for an even uglier one, the one Tiger Woods had his famous accident in, a car that’s been dubbed ‘the axle of evil.’

At US$118 a day that Thrifty-Rent-a-Car Charger in Boston was almost the worst value rent-a-car of the year as well as the ugliest. The Nissan Note (from Avis in London) at US$130 (for just one day) was even more expensive. On the other hand Thrifty also provided 2009’s best value rent-a-car (a combination of car and cost), a BMW 3 Series in Sydney for US$96 a day.

Best drive of the year? That would have to be the week I spent travelling around the Faroe Islands in that forgettable Suzuki Swift.  I wrote about the Faroes for The Independent as well.