I’m running through my travel lists for 2008, we started with interesting hotels, moved on to  best music experiences, and then the views out the window from my favourite flights. Today it’s cars and drives.

I didn’t cover a lot of distance by road in 2008. There were no long Australian outback trips, no long road trips in Europe or America. In fact I only rented a car on a few occasions and although I spent several months of 2008 in Europe I only had a car for one weekend in England. But there were some four-wheel experiences including moose dodging in Canada and some high speed km in my own car in Australia.

Newfoundland
The car was a Chevy Cobalt, so anonymous I had to Google it to find what country it was built in. I rented it from the Deer Lake airport, drove it up to L’Anse aux Meadows on the north-west tip of Newfoundland and back to Deer Lake again. And dodged a few moose en route.

Miami
I didn’t get behind the wheel – just one taxi from the airport and another back – but I did spend one day in an art deco hotel on Miami’s South Beach, en route to Haiti. And of course I strolled Ocean Drive that evening, watching what drove by and admiring what was parked, like this fine old 1956 Ford Thunderbird. 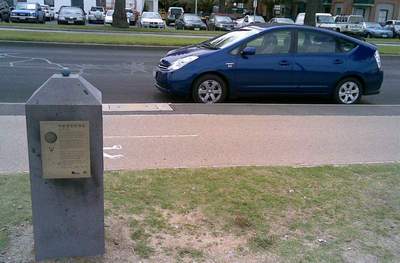 Prius
My regular wheels during 2008 was a Toyota Prius I bought in late 2007. Here it is parked beside the planet Neptune on the Melbourne Solar System which the Planet Wheeler Foundation helped to develop in 2008. More on that soon. My Prius averages 5.5 litres per 100km (53 mpg in England, 47 mpg with the slightly smaller US gallon) and I think it’s great, a very interesting car to drive around. I know the guys from the BBC TV programme Top Gear hate them! They’ve described it as a ‘Hateful lentil-fuelled transport for the insufferably self-righteous. And it’s not even all that economical.’ I don’t know how Top Gear defines ‘economical,’ but it’s good enough to impress me.

Lotus
I also bought a new Lotus Europa S in 2008, that’s the car I drive when I haven’t got to transport people or anything much bigger than a laptop. It’s small and light enough to feel you’re not being too environmentally insensitive when you’re driving something quite fast (I think it averages around 8 to 8.5 litres per 100km). And it is quite fast, I checked by taking it out on the Sandown motor racing track in Melbourne one day.