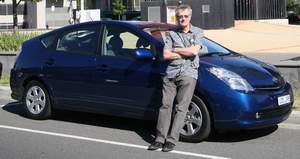 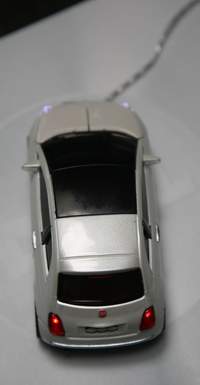 Car Two
And I’m driving my computer with a Fiat 500 mouse – a ‘Cinquecentro’ in Italian. The original Fiat 500 is 50 years old this year. Last year Britain’s Top Gear magazine judged the original to be the ‘World’s Sexiest Car.’ Sex in the tiny confines of a Fiat 500 would definitely require a close study of the Kama Sutra. And the new version of the Fiat 500 is already a hit in Europe.

an original Fiat 500 in Australia 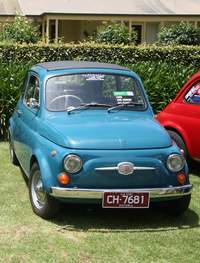 Africa and …
My Fiat mouse came – as all good Fiats (but not the new 500) should – from Turin in Italy. I was there to launch the Italian edition of Bad Lands recently. The beautiful old Lignotto Fiat factory is now a classy shopping centre with cinemas and an art gallery. It still features a banked test track on the roof! It also features an art gallery showing, until 3 February 2008, Why Africa? a fantastic exhibit of modern African art from the Jean Pigozzi collection, probably the world’s best collection of contemporary African art.

Afghanistan
Still in Turin I also visited a surprising collection found at a royal burial site in Afghanistan, just before everything went dramatically wrong. For the next quarter century it was successfully hidden from the Russians, the assorted mujaheddin and the Taliban. The exhibit has been in Paris and Turin and will be shown at various US locations through 2008 and 2009. There are stories in the International Herald Tribune and the Washington Post on this remarkable collection’s even more surprising story of survival.