Bicycle sharing schemes are all the go – I’ve posted blogs about my experiences with them in Melbourne (where the Melbourne Bike Share scheme launched just a few weeks ago) and in Paris (I was in Paris in 2007, not long after the Vélib’ scheme launched).

Car sharing schemes are also spreading around the world. You join up and you’re issued with a swipe card. The cars are parked at key points around the city. 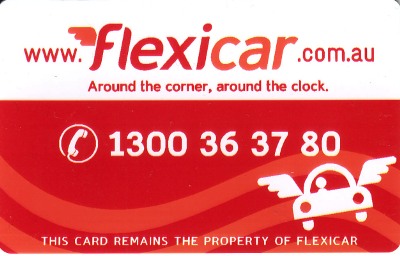 When you want a car you find the nearest available one that’s free on the web, book it online, swipe your card over the card reader in the car, get in and drive away. Compared to a regular rent-a-car there’s no paperwork, you don’t have to go to a rent-a-car office, fuel is included and you can get a car by the hour, not just by the day

In the USA Zipcar is number one, they have 6000 cars in around 50 American cities. That’s almost half of all the car sharing vehicles worldwide. Zipcar also operate in London – where I live for part of the year – and I’ve recently signed up there, although I’ve yet to try it out. In Australia Flexicar is the biggest operator in Melbourne where I also live for part of the year. My Car Club is number one in Sydney and Go Get is a third Australian car sharing operator.

I don’t own a car in London and most of the time public transport (the tube, the tube) and taxis get me around just fine, but I know I’ll find my Zipcar useful from time to time. In Australia I’ve got two cars (a Lotus Europa and a Toyota Prius) so I don’t need to join a car sharing scheme, but I thought it would be interesting to give it a go. So I joined Flexicar, got my card, booked a car called ‘Farmer John’ in nearby Richmond, pedaled over to it on my Brompton bicycle and away I went, with the bike in the boot. Farmer John was a Honda Civic Hybrid and we covered 45km around the city in the next few hours, averaging 6.5km per 100 litres (45 mpg imperial, 40 mpg US), not bad, but not quite as good as my Prius.

Obviously allocating car share parking spots has to be worked out in agreement with local city councils. Most of them realize how environmentally sensible car sharing is and how allocating one car share parking space frees up lots of regular spots. Nevertheless In Melbourne, Australia the council covering the young, inner city suburbs of South Yarra and Prahran, ideal territory for car sharing, has been slow to catch up with the idea.